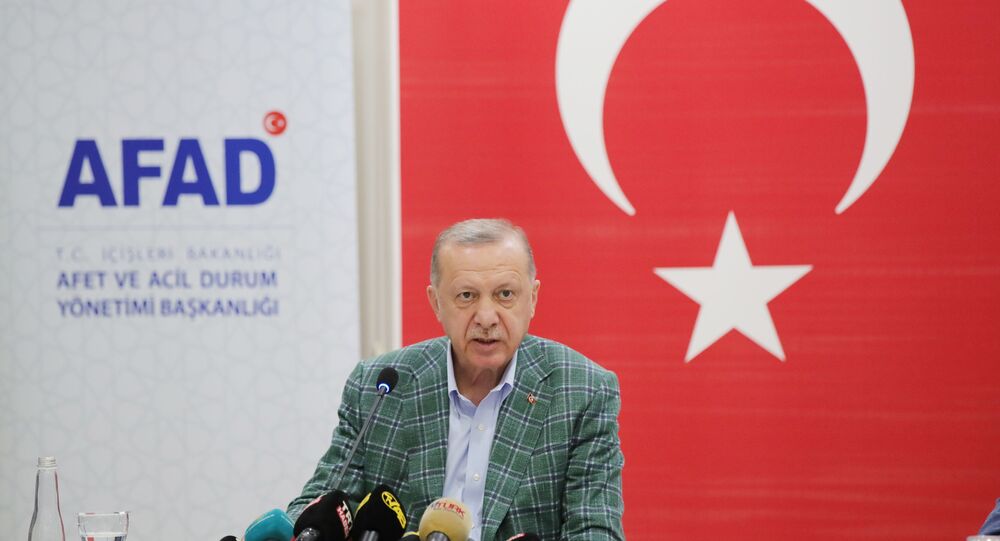 “Wildfires are an international threat comparable to the COVID-19 pandemic,” Erdogan told A Haber television channel.

“It can even be compared to the threat of terrorism,” he said.

Erdogan said the entire world is facing the threat of forest fires, with forests burning in the United States, Canada, Russia, Spain, Italy and African countries.

“I spoke with Russian President Vladimir Putin. He sent us three planes and four helicopters (for extinguishing forest fires). This is solidarity. Azerbaijani President Ilham Aliyev announced his intention to send another amphibious aircraft to Turkey,” the Turkish leader said.

Erdogan said that over the past eight days, 187 wildfires have broken out in Turkey, most of which have been localized. Fifteen fires continue, 20 aircraft and 51 helicopters are involved in extinguishing them.

Since last week, massive fires have erupted in at least 35 Turkish provinces, chiefly on the country’s Mediterranean and Aegean coasts. Eight people have died as a result. ​An investigation into what caused the disaster is underway, and while the Kurdistan Workers’ Party, which Turkey considers a terrorist organization, has claimed responsibility for the arson, the Turkish government has not officially blamed the fires thereon.

Turkish Minister of Agriculture and Forestry Bekir Pakdemirli said earlier on Wednesday that 14 forest fires were being extinguished in the south of the country, including nine in the Turkish resort provinces of Antalya and Mugla.

One Year After Israel-UAE Normalisation Announcement, Trade Flourishes Despite Hiccups

‘Technical, Human Errors’ May Have Caused Ever Given Blockage, Suez Canal Chief Says

Who is Iran’s New President and What Can Be Expected of Him Both Domestically and Globally?