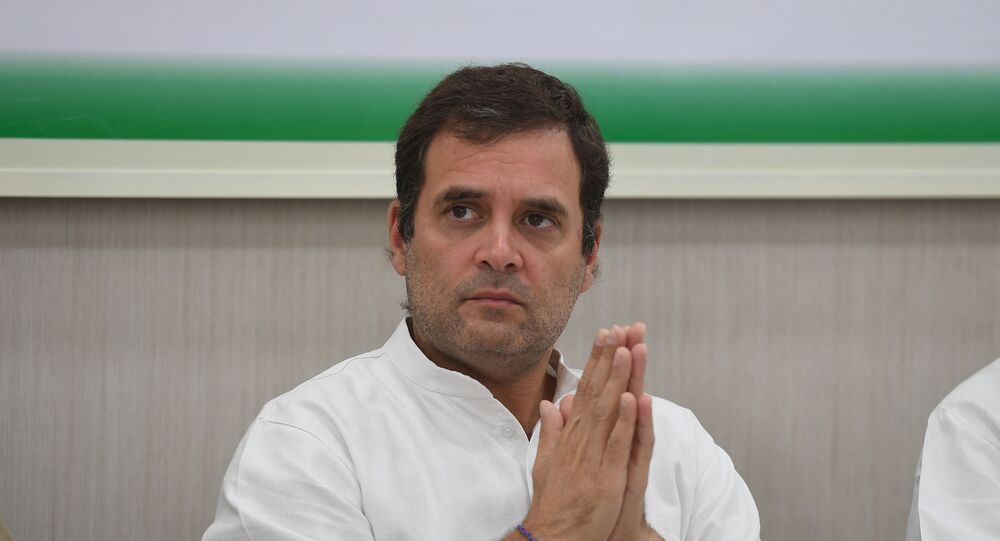 On 1 August, a nine-year-old girl told her mother that she was heading to a nearby crematorium in Delhi’s Cantonment area to fetch some drinking water. After around 30 minutes, a priest informed the girl’s humble, rag-picker parents that their daughter had died. The child was hurriedly cremated the same day.

Rahul Gandhi, a key leader of India’s main opposition party Congress, on Wednesday met the parents of a nine-year-old girl who was allegedly raped and murdered in Delhi last Sunday.

Gandhi shared a video via his official Instagram handle showing the victim’s parents wailing. The 50-year-old parliamentarian and former chief of the Indian National Congress (INC), can be seen hugging the minor’s tearful father inside a car. The mother, sitting on the front seat of Gandhi’s car, can also be seen getting breathless and restless while remembering her deceased child.

“India’s daughter deserves justice. To ensure timely justice is done, I am standing with this family,” Gandhi captioned his video.

What Happened to the 9-year-old Over the Weekend?

According to Deputy Commissioner of Police (South West), Ingit Pratap Singh, the minor belonged to the Dalit community and resided in the Nangal area of Delhi. She had told her mother that she was going to get some water from a nearby crematorium.

He said a 55-year-old priest, Radhey Shyam along with three crematorium employees, Salim, Laxmi Narayan, and Kuldeep have been arrested in the case. Their alleged involvement is being investigated.

The men told the girl’s parents that she had been electrocuted while filling water from the cooler. But soon, without taking the consent of her family members and informing police officials, the crematorium workers burnt the girl’s body, raising suspicions regarding their involvement.

The four men asked the girl’s mother to not engage police in the matter.

“Instead, they told her that the police would register a case and the body would be sent for autopsy, during which doctors would remove her vital organs and sell them,” DCP Singh told the media.

A board of three doctors has been asked to conduct an autopsy on the charred remains of the body that was pulled off the pyre midway through the cremation.

In addition, the investigating officers are considering polygraph tests on the arrested men, Indian media reported.

The gruesome incident has stirred major uproar in Delhi. The #JusticeForDelhiCanttGirl hashtag is trending on Twitter in India.

We pledge to leave no stone unturned to get justice for the little girl. #JusticeForDelhiCanttGirl https://t.co/us1GwXp14j

Dear @UNHumanRights @hrw @UN
A 9 year old Dalit girl has been burnt alive after being raped by 4 upper caste Hindu people in the capital Delhi and police and administration are trying to suppress the case by intimidating the victim’s family, please help #JusticeForDelhiCanttGirl pic.twitter.com/uLFQGSrUtd

The gut-wrenching incident has been raised by several politicians including Derek O’Brien from the Trinamool Congress (TMC) during the ongoing Monsoon Session of the Parliament.

Once again proven, ONLY DALIT LEADERS care about DALITS…

Chandra Shekhar Azad of Bhim Army / ASP(Kanshi Ram) protests and meets family members of 9 year old Dalit Valmiki girl, who was raped, murdered and whose body was burnt to dispose off evidence in Delhi. pic.twitter.com/wSyzocRlt6

​In July, Delhi Police released data revealing that crimes against women in the capital witnessed a sharp rise during the first six months of 2021.

Between January and June this year, a total of 833 rape cases were registered in Delhi, marking a 43 percent surge compared with last year, according to the Delhi Police data.