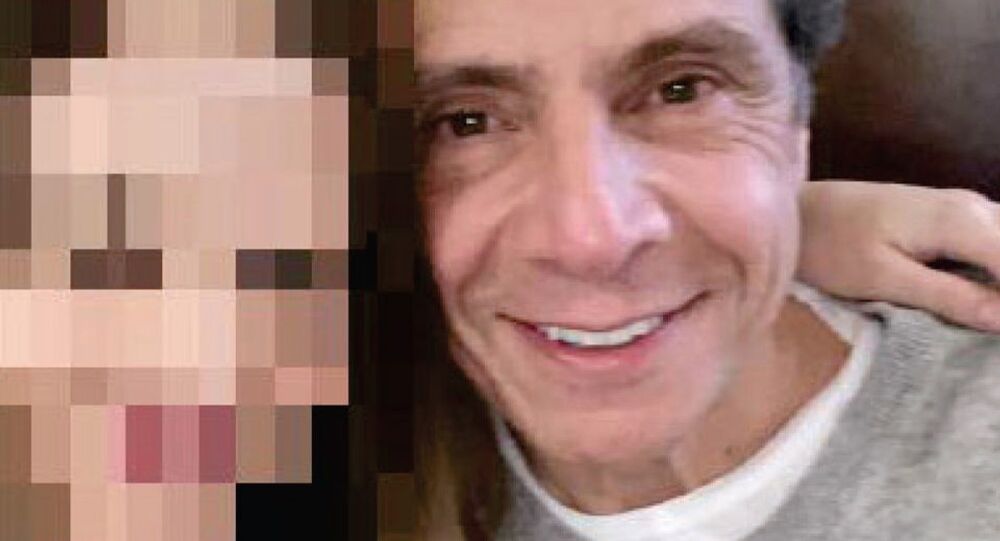 A photograph has emerged of the under-fire Governor of New York, Andrew Cuomo, smiling with an employee at the exact moment he was allegedly groping her.

The image was released as part of Letitia James’ damning report against Cuomo, who earlier this year denied a string of allegations that he was a sex pest.

According to the report, the woman in the picture, who is identified only as Executive Assistant #1, told the investigation team he molested her after he asked to take selfies as the pair worked at his office at the Governor’s Mansion in the state capital, Albany on New Year’s Eve 2019.

​Executive Assistant #1 claimed he “moved his hand to grab her butt cheek and began to rub it” for about five seconds.

She said she “was shaking so much during this interaction” and the picture came out blurred.

Cuomo ostensibly told her to send the picture to an aide, Alyssa McGrath, who has also made allegations against the Governor.

He purportedly told her “not to share the photograph with anyone else.”

Executive Assistant #1 said he believed the purpose of sending the picture to Ms McGrath was to make her “jealous.”

Congratulations to creepy Joe Biden for winning hypocrite of the year for asking Andrew Cuomo to resign for inappropriate touching of women pic.twitter.com/DP8m3Jq6c2

​“The way he was so firm with me that I couldn’t show anyone else that photo, I was just terrified that if I shared what was going on that it would somehow get around,” Exective Assistant #1 investigators.

She claims he also groped her breast in the Governor’s Mansion in November 2020.

Overnight President Joe Biden and the Speaker of Congress, Nancy Pelosi, have both called on Mr Cuomo to resign but he is adamant he is innocent.

Cuomo said in a televised statement: “I never touched anyone inappropriately or made inappropriate sexual advances. I am 63 years old. I have lived my entire adult live in public view. That is just not who I am. And that’s not who I have ever been.”

Going for Gold: Why Precious Metal is Reliable Hedge Against Inflation & How to Invest in It Smartly