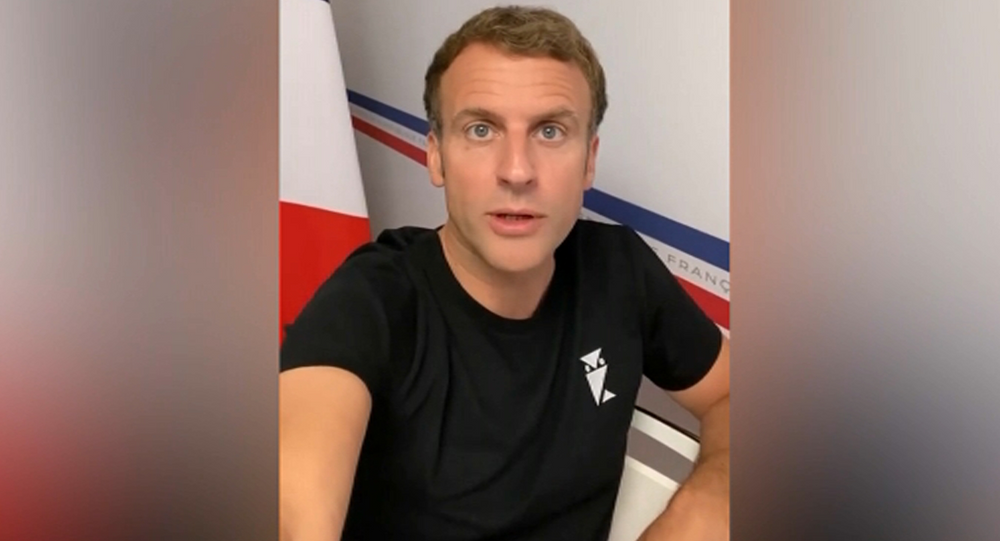 Ordinarily, the French president appears in public in suits, and in the most informal of occasions, in a white shirt, tie, and suit pants.

Emmanuel Macron is trending on social media after appearing in a TikTok Q&A session wearing a hip black T-shirt with a mysterious abstract logo containing triangles and circles.

The session, which took place Monday and was aimed at persuading reluctant young people to get vaccinated against the coronavirus amid the massive anti-Covid passport protests which have overwhelmed many French cities in recent weeks, gained traction for all the wrong reasons online, with a majority of users discussing Macron’s attire, rather than his message.

Some fashionistas apparently only wanted to know what brand of t-shirt Macron was wearing, presumably so that they could get one for themselves.

Tweet reads: “Let’s talk about the background: What is the brand of Emmanuel Macron’s t-shirt?”

Others, including Le Monde Moderne reporter Alexis Poulin, quipped that the mystery logo may be the logo of his, the president’s, “new party” (Macron had founded the liberal centrist La Republique En Marche! party from scratch in 2016 following his work as an investment banker at Rothschild & Cie Banque and a brief career as a minister).

Macron’s young female fans swooned over the president’s choice of attire, saying the t-shirt made him look “handsome” and “stylish”.

The mystery deepened as French media scoured the internet to figure out if the logo was a registered trademark or design. According to Oust-France.fr, the logo could not be found in French or international brand databases, and no similar brand has been registered to date. Furthermore, a cursory reverse image search using Google, Yandex, and Invid similarly yielded no results.

Whatever its origins, and whether it is an established brand or not, Macron’s shirt has already sprung up on popular online clothing retailer lalingeshop.com, with the “Macron tiktok T-shirt” selling for 20 euros and available in black or white.

When Joe Met BoJo: What’s so Special About Their Relationship?