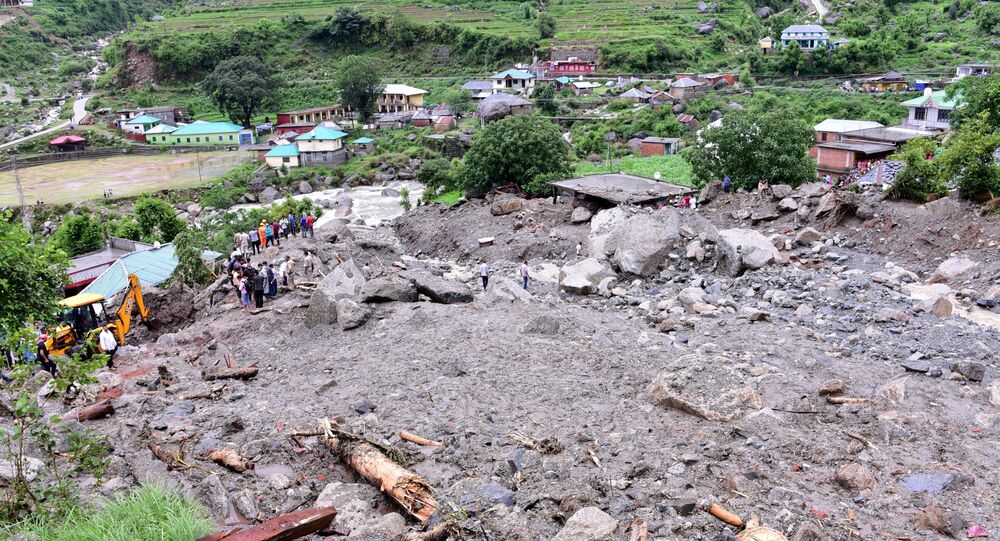 The ongoing monsoon season in India has been causing flash floods, cloudbursts and landslides in some states.

A major landslide which happened early Wednesday on national highway 907 has halted traffic and disrupted the lives of locals in the Nahan and Kumarhatti regions of India’s Himachal Pradesh state.

Officials from the State Disaster Management Authority (SDMA) along with local police are carrying out restoration work on the landslide-affected patch of the 57 km-long highway, which connects Himachal Pradesh to Haryana state.

Earth-movers and air compressors are being used to clear the road and remove mud, rocks and plants following the landslide.

Yet another landslide at Himachal Pradesh convince us one thing this year we have seen so much flooding and lot of landslides our Hills are badly ignore and it needs specialist intervention to keep the nature alive the the earth on the hills are getting loose it needs attention. pic.twitter.com/fCTOU7soG3

​​”After such incidents where no injuries or fatalities are reported, our main focus is to ensure that the movement of traffic remains monitored. The roads on these mountains are narrow and we want to avoid major traffic congestion here. Locals, who run their food or other shops in nearby areas, are also advised to move to safer regions,” Raman Bharadwaj, a Himachal Pradesh Police official told Sputnik.

“The unpredictability of the weather in these mountains, especially during the monsoon season, is very dangerous. Tourists arriving in low-lying regions are being informed by patrolling police officials and locals to avoid going to higher altitudes for now,” Bharadwaj added.

Similar landslides have been reported in other regions of Himachal Pradesh in recent days.

On 3 August, a 22-year-old man reportedly died in a landslide that hit the Solan District of the Himalayan state.

The roads around Gangotri, which is the source of the holy Ganges River, have also been hit by landslides troubling locals and tourists, media reported.

Visuals of the landslides have surfaced online, showing chunks of mountain lands collapsing into sand and stones.

​This monsoon season, over 200 people and more than 400 animals have lost their lives in rains, cloudbursts, and landslides in Himachal Pradesh so far, Sudesh Kumar Mokhta, director of SDMA has revealed to Indian media.

The state estimates that losses have totalled over $82 million.