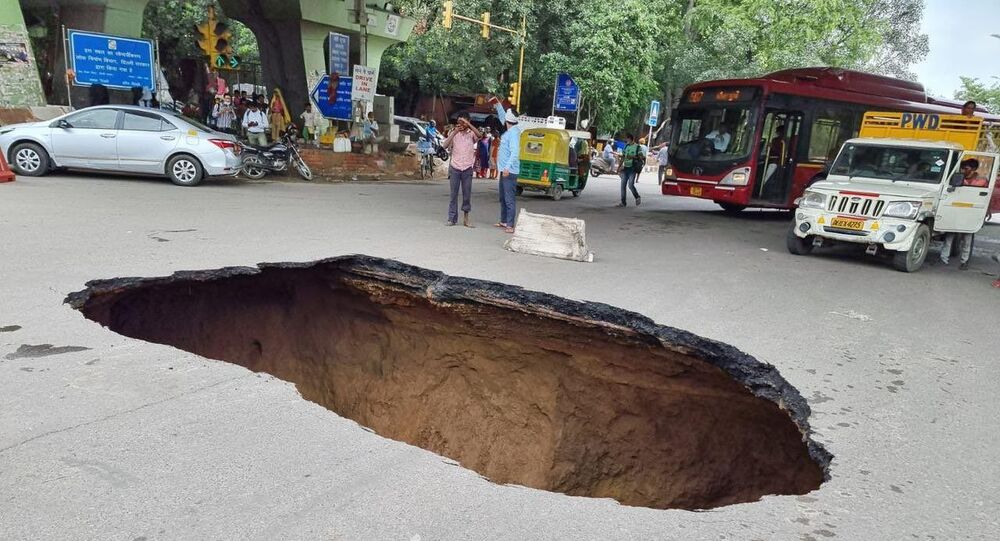 Heavy rainfall earlier led to a giant hole on a road in Delhi’s Dwarka region. Tragically, a car was stuck inside the hole and it was pulled out by a crane. However, the Delhi Police said at the time that no injuries were reported in the incident.

On Saturday afternoon in India’s national capital, a huge hunk of road near one of the country’s premiere institutes caved in causing massive traffic disruptions. To control the situation, the traffic police in Delhi had to shut vehicular movement on that stretch of the road and divert traffic to alternate routes.

“Due to the collapse of the road near the IIT traffic light, vehicles going from IIT to Adhchini have been diverted to Katwaria Sarai. Please avoid using this route”, the Delhi Traffic Police tweeted on Saturday.

​Meanwhile, traffic police officials, as well as officials from Delhi’s Public Works Department, are present at the scene and the area has been cordoned off. Due to the incessant rain in the nation’s capital and nearby regions for the past few days, several stretches of road are dealing with waterlogging and traffic congestion, including the ITO, Ring Road, and Mathura Road.

Moreover, there have been rising complaints of bus breakdowns from several parts of Delhi, including Newada, Ashok Nagar, and Dhaula Kuan, which has led to slow traffic flow. Earlier this week, a portion of the Shahjahan Road near Jamnagar House caved in due to continuous heavy downpours.