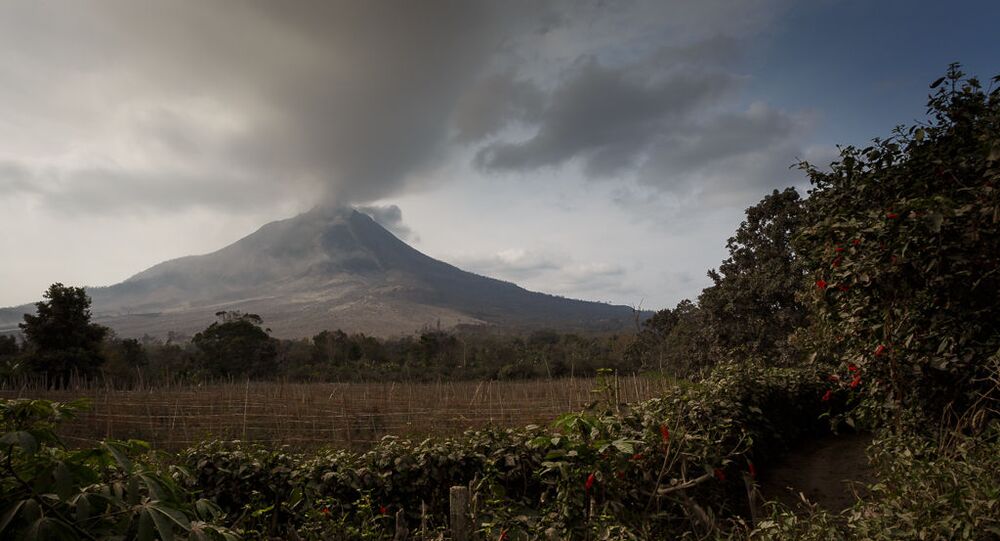 Indonesia has more than 120 active volcanoes due to the country’s location along prominent tectonic fault lines. The Sinabung volcano remained inactive for about 400 years before awakening in 2010. Since then, Sinabung has erupted several times, leaving more than a dozen people dead.

The active volcano Sinabung, located in the Indonesian province of North Sumatra, threw a thick column of ash high into the sky on Wednesday.

“The eruption of Mount Sinabung occurred at 13:20 local time, the height of the ash column reached 4.5 kilometres”, Armen Putra, a member of a local monitoring post under the Indonesian Centre for Volcanology and Geological Hazard Mitigation, told CNN Indonesia.

According to seismologists, the eruption lasted 12 minutes and 22 seconds. Putra noted that the volcanic activity is currently at a level-three alert, meaning that other eruptions are possible within the next two weeks. Despite no evacuation order, authoritites have urged locals to avoid a 3,000-metre radius around Sinaburg’s peak and wear masks not to inhale volcanic ash.

Pillar of Ash Thrown by the Sinabung Volcano on the Island of Sumatra, Indonesia. Hook up the #bitcoin miners! pic.twitter.com/1bVWvz9YJx

This is a breathtaking photo of the Mount Sinabung eruption. pic.twitter.com/ReR5vnrqeT

The volcano, which was dormant for four centuries, erupted in 2010 and killed two people. Its eruption in 2014 and 2016 resulted in sixteen and seven victims, respectively. In recent years, over 30,000 people have been forced to leave their homes in villages surrounding Sinabung.

Indonesia has some of the highest seismic and volcanic activity in the world. The planet’s largest archipelago is part of the so-called Pacific Ring of Fire – a horseshoe-shaped strip of volcanos and tectonic splits 40,000-kilometres long.