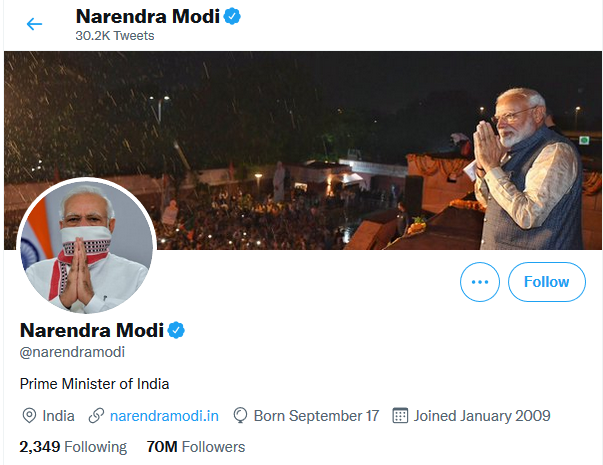 Former US President Barack Obama leads the list of the highest number of followers on Twitter with 129.8 million, while current President Joe Biden has over 30 million followers.

Hitting a new milestone of over 70 million Twitter followers, Indian Prime Minister Narendra Modi remains one of the most followed active politicians across the globe on social media, followed by Pope Francis with over 53 million followers.

India’s Minister of Petroleum and Natural Gas Hardeep Singh Puri congratulated Modi and said that he is “a leader who listens, responds & communicates is a refreshing change”, while Information and Broadcasting Minister Anurag Thakur said PM Modi has a direct connection with people, whether “online or offline”.

Ya it’s 70 million with fake followers & from the real followers how many are boosted by the IT cell and promotions?
How many real and genuine followers from India? #BJPExposedAgain
Check out @narendramodi’s audit! https://t.co/auH7aqjpTe #twitteraudit pic.twitter.com/QjF7ki27H1

​Meanwhile, the Modi government and Twitter have been engaged in a spat after new rules were introduced by the federal government for social media platforms. Several government departments, ministers, and celebrities have been moving to the indigenously developed microblogging app Koo, away from Twitter.