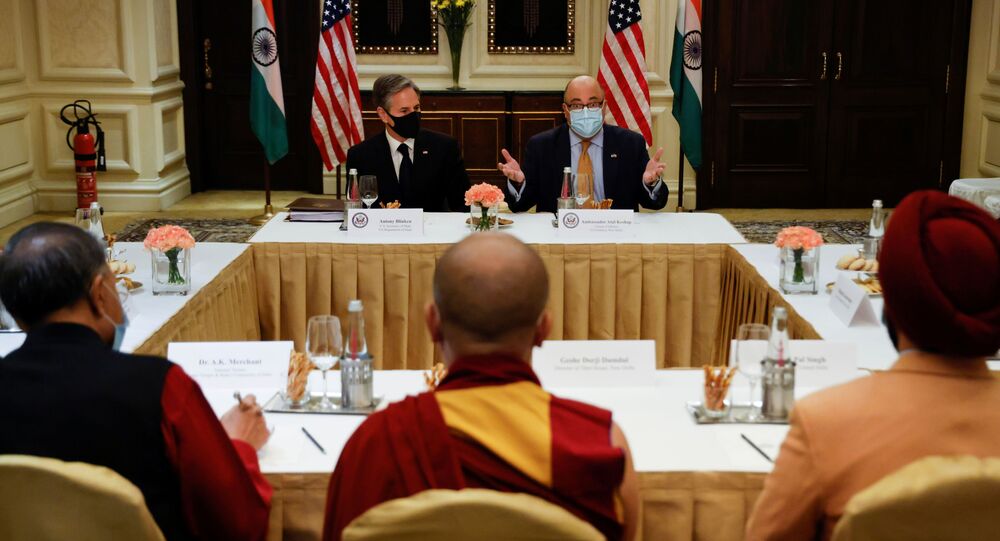 There are more than 10,000 Tibetans living in Dharamshala, a town in the Indian state of Himachal Pradesh. It is the seat of the Tibetan government-in-exile and residence of the Dalai Lama, who fled Tibet in 1959 and settled in India. The town has become popular among tourists, with thousands of people pouring in to visit the Tibetan monasteries.

India and the US appear to have conveyed a strong political message to their rival China on Wednesday. The tone of US Secretary of State Antony Blinken’s two-day visit was set when he met with prominent Tibetan leaders in Delhi earlier today.

Blinken met Geshe Dorji Damdul, the current director of Tibet House, which was founded by top Tibetan Buddhist leader Dalai Lama in 1965 to preserve and disseminate the unique cultural heritage of Tibet. The former interpreter of the Dalai Lama, Damdul, was part of a group of civil society leaders who met Blinken for a roundtable discussion.

“Secretary Blinken had an opportunity to meet briefly this morning in New Delhi with a representative of His Holiness the Dalai Lama,” a US State Department spokesperson stated.

I was pleased to meet civil society leaders today. The U.S. and India share a commitment to democratic values; this is part of the bedrock of our relationship and reflective of India’s pluralistic society and history of harmony. Civil society helps advance these values. pic.twitter.com/5NL2WiQ13o

Blinken’s meeting with Tibetan representatives is being viewed as one of the most important engagements the US has made with the Tibetan leadership since the Dalai Lama met then-US President Barack Obama in 2016 in Washington.

Last November, Lobsang Sangay, the former head of the Tibetan government-in-exile, visited the White House. It was the first such visit in six decades.

Today’s meeting has come amid strained US-China relations. Also, India and China’s relations are “at a low” due to a border stand-off between the two countries in Ladakh region which has persisted for over a year. Both the countries have deployed troops in Ladakh following violent clashes between soldiers of the two countries that have claimed lives on both sides in 2020.

Meetings with Tibetan leaders, say observers, will pique the interest of Beijing, which considers Tibet to be an integral part of China. ” Chinese President Xi Jinping visited Tibet last week sending out a clear message of China’s assertion on Tibet. China has always protested against foreign powers voicing their concerns regarding the plight of Tibetans in Tibet. Though the US Secretary of State’s meeting with Tibetan leaders gives hope to Tibetans across the world, it is also very likely to provoke strong reactions from China,”said Tenzin Dorjee, a Tibetan scholar associated with the Tibetan Policy Institute.

Wednesday’s meeting with the Tibetan leader is also evoking reactions in India.

Early this month, Republican MP Scott Perry from Pennsylvania introduced a resolution in the US Congress, calling on President Joe Biden to declare Tibet an independent country. The 2021 Tibet Bill also urged Washington to recognise the “democratically elected government of Tibet, presently named as the Central Tibetan Administration, as the only governing authority of Tibet”.

Last month, the US Senate passed a bipartisan Bill to heed the call to open a consulate in Lhasa. It also called for reinforcing the global engagement on policy towards the reincarnation of His Holiness — the Dalai Lama.

Protesting Farmers Capture A Youth, Who Claims to be Part of Plot to Incite Violence, Kill Leaders