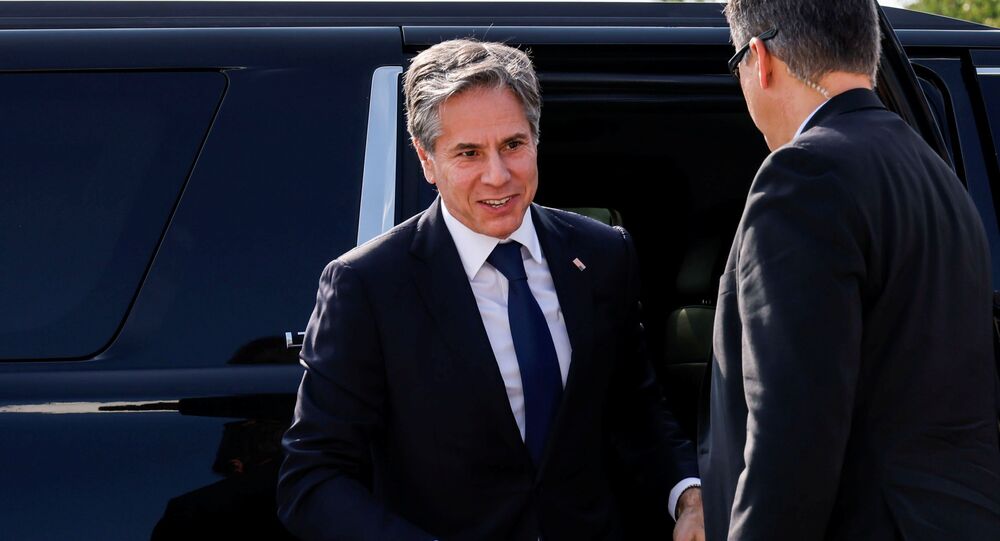 US State Secretary Antony Blinken’s visit to New Delhi is aimed at “deepening” strategic partnership between the two nations,” including on regional security, the Indo-Pacific region as well as the COVID response. Ahead of his visit, the US called India a “critical ally” in the region.

​Those in attendance at the Civil Society Roundtable addressed by Blinken in Delhi included Satinder Pal Singh from the United Sikhs, a non-profit actively supporting the Indian farmers’ protests.

On its website, the United Sikhs’ chapter in India claims to have helped 84 farmer protesters in Delhi, including providing legal aid, food aid, and rehabilitation and counselling services. The group also claims to have allocated more than $34,000 in assistance to support farmer protesters arrested and missing in the aftermath of the chaotic tractor rally in Delhi on 26 January.

“Citizens across the country were very pained to see the tricolour being dishonoured on 26 January,” Modi said.

The New York-headquartered United Sikhs has also been lobbying US Congress members to support the Indian farmer protests.

“Anti-Farm laws were rushed through government without input from farmers. These laws will lead millions of farmers and their families to starvation. Tens of thousands of farmers from all across India have gathered on the streets to protest unfair treatment,” the charity said in a statement on 8 December.

“We don’t have anything to add to the secretary’s tweet,” the US Embassy in Delhi said after being asked by Sputnik about Singh’s attendance.

In the lead-up to Blinken’s India visit, the US State Department said it would take up the issue of human rights with the Indian government. In response, Indian Foreign Ministry sources said that Delhi was proud of its pluralistic traditions and was ready to engage with the US on human rights issues.

“In short, if we want to make our democracies more open, more inclusive, more resilient, more equitable, we need a vibrant civil society. As leaders in your respective communities, I think you know this better than anyone. I am proud of all the connections that already exist between civil society organisations in our countries,” stated Blinken during the roundtable.

Peace and No Stress: How Yoga is Gaining Popularity Among Indian Millennials