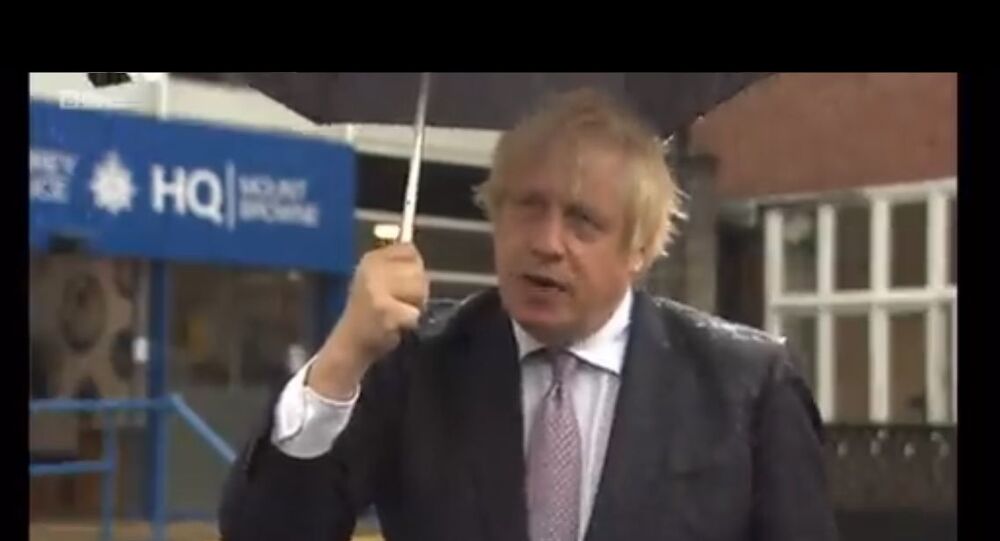 British Prime Minister Johnson braved the rainy weather to visit Surrey Police headquarters to talk about the government’s new plan to tackle crimes. However, it was not his ‘chain-gangs’ initiative that has attracted so much attention online.

Social media users suspect Boris Johnson of having some troubles with umbrellas.

The prime minister had quite a wet and frosty reception at Surrey Police headquarters on Tuesday following an announcement that most police officers across the country will be hit with a pay freeze.

Johnson tried to cool tensions down as he spoke to reporters outside of the headquarters while defending his approach to law and order with the government’s new Beating Crime Plan. It was raining heavily at the moment, and despite the prime minister having an umbrella ready at his disposal, it didn’t really help.

As images of the drenched prime minister with a brolly in his hand were making rounds on social media, users went on to discuss what could have possibly gone wrong. Some joked that it was probably the first time the prime minister had held an umbrella in his life.

“Most Boris Johnson thing ever – gets interviewed outdoors in heavy rain and doesn’t even know how to use an umbrella to keep rain off,” one user commented.

“Boris Johnson still managing to get wet under an umbrella yes that’s the Prime Minister,” another one sarcastically announced.

The biggest task Boris Johnson faces today: learning how to effectively use an umbrella. pic.twitter.com/3d6KYsKtrh

Boris Johnson still managing to get wet under an umbrella yes that’s the Prime Minister pic.twitter.com/2xO5mxVvpP

Despite a flurry of some mocking comments about the prime minister, the whole umbrella drama was a nice distraction from the backlash Johnson’s government is facing over a pay freeze this year for police officers who earn more than £24,000. The NHS staff is still expected to receive a 3% raise, while local government workers and firefighters are expected to get a 1.5% pay increase.

‘They Also Paid For It’: Golden Trump Statue Made in Mexico, Artist Says

‘Did He Wear a Bikini?’ Twitter Checks Out Fauci Delivering Looks for InStyle (Before FLOTUS!)