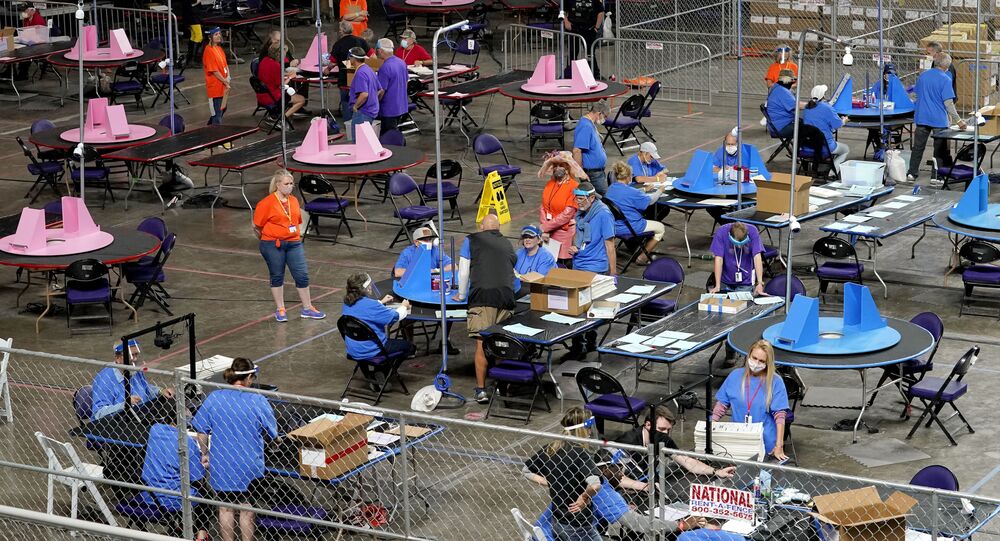 In a statement to BuzzFeed, Twitter clarified that audit accounts were blocked “permanently” over violating the Twitter rules on platform “manipulation and spam”.

Following Twitter’s move, The Arizona War Room migrated to GETTR, a new social media founded by Jason Miller, a former Donald Trump aide and spokesman, and announced that the accounts of barred “war rooms” from the other five states would be set up on the new platform soon.

During the event, eloquently called “Rally for Election Integrity,” the ex-president praised the Arizona Senate’s months-long audit of Maricopa County’s 2.1 million ballots and election equipment. Trump also called upon the state’s Attorney General Mark Brnovich to launch an investigation based on the final results of the recount.

​”We will fight for truth, transparency, and accountability, and we will not stop until we have restored our American birthright of honest, free, and fair elections,” the former president stated. “We’re gathered here in Phoenix to show our support for election integrity and for the brave and unyielding conservative warriors in the Arizona state Senate.”

Previously, Trump also endorsed efforts to kick off 2020 election audits in other American states, stressing that he never conceded to what he considers rigged elections.

That’s because @Jack, @Twitter, and the main stream media doesn’t want anybody to see the results. There’s no other reason to do that. https://t.co/QiCbotRqHl

Dominion Voting Systems has been directly subpoenaed by a state legislative body demanding access to their equipment & software. No word on their website yet as to how they intend to respond – https://t.co/ABth6E8Zoc pic.twitter.com/uSrDYUgFW2

​They also subpoenaed Dominion Voting Systems, the manufacturer of voting machines used in Maricopa County last November, for the first time since the beginning of the third forensic audit of the 2020 election results. The legislative subpoena, issued on 26 July, orders Dominion to appear on 2 August 2021 at 1:00 p.m. (EST) in the Arizona Senate chamber of the state Capitol.

The state’s Democratic officials and the Maricopa Board of Supervisors have opposed the GOP’s audit effort from the start. They have repeatedly called upon Arizona Republicans to stop the recount lambasting the independent group of auditors led by firm Cyber Ninjas as “incompetent”.

Similarly, Dominion Voting Systems earlier told the Associated Press that releasing their intellectual property to an “unaccredited, biased, and plainly unreliable actor such as Cyber Ninjas would be reckless, causing irreparable damage to the commercial interests of the company and the election security interests of the country”. Dominion came under the spotlight after the Trump legal team suggested that the firm’s voting machines had been used for manipulating the ballots, something that the company vehemently denies.

Weird how all these election audit accounts are getting suspended on the same day as House Democrats begin their Jan. 6th Show Trial.

​Meanwhile, some Twitter users have drawn attention to the fact that the audit accounts were axed on the same day when the House Democrats kicked off hearings of the select committee investigating the January 6 Capitol protests.

The initiative spearheaded by House Speaker Nancy Pelosi, the one who previously launched two impeachment hearings against President Donald Trump, was heavily criticised by GOP lawmakers as a “partisan charade.”

Pelosi tapped two Republicans  – Reps. Liz Cheney and Adam Kinzinger – known for their criticism of Trump to serve on her 1/6 panel and blocked Minority Leader McCarthy’s picks, Reps. Jim Jordan and Jim Banks, claiming that they would undermine the process. In response, McCarthy stated that House Republicans would not participate in Pelosi’s “sham process and will instead pursue our own investigation of the facts.”

On 6 January, part of a crowd of alleged Trump supporters illegally entered the Capitol building where US lawmakers were about to certify Joe Biden’s election victory. The protesters came to the Capitol Hill over concerns stemming from the alleged election irregularities, last minute changes of election rules in a number of swing states and supposed voter fraud.

Hillary Clinton Gives Biden ‘A’ for Effort, Says He Is ‘Less Constrained’ Than Predecessors