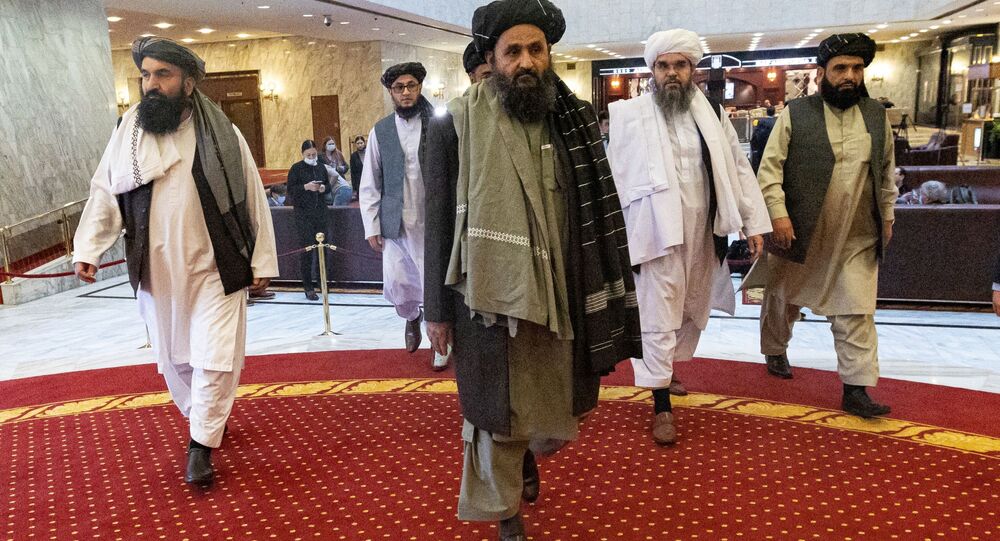 As the United States and coalition forces are set to fully withdraw troops by September, the Taliban* has been taking districts and border crossings around the country in a flurry of offensives against the Kabul government’s troops, triggering security concerns in China, which shares a border with the war-ravaged nation.

Nine Taliban* representatives met with China’s Foreign Minister Wang Yi in the northern city of Tianjin in the framework of a two-day visit to the country after an invitation from Chinese authorities, according to Taliban spokesperson Mohammed Naeem.

“Politics, economy and issues related to the security of both countries and the current situation of Afghanistan and the peace process were discussed in the meetings,” said Naeem in a series of tweets on his account on Wednesday.

“(The) delegation assured China that they will not allow anyone to use Afghan soil against China… China also reiterated its commitment to a continuation of their assistance with Afghans and said they will not interfere in Afghanistan’s issues but will help solve the problems and restoration of peace in the country,” said Naeem.

Slamming the withdrawal of US and NATO troops from Afghanistan as representing a failure of US policies, Wang urged  the Taliban to play a role in the peace process, reported the South China Morning Post.

“The Taliban in Afghanistan is a pivotal military and political force in the country, and will play an important role in the process of peace, reconciliation and reconstruction there,” Chinese State Councillor and Foreign Minister Wang Yi told the visiting delegation, according to a foreign ministry statement.

China pledged to support Afghanistan’s sovereignty and territorial integrity, while demanding the Taliban sever all ties with the East Turkestan Islamic Movement (ETIM).

“ETIM is an international terrorist organisation listed by the UN Security Council and poses a direct threat to China’s national security and territorial integrity,” Wang said, referring to the group that Beijing says is active in its far west Xinjiang region.

“Fighting ETIM is the common responsibility of the international community and I hope the Afghanistan Taliban will cut ties with terror groups such as ETIM. The Afghanistan Taliban can contribute to an effective crackdown against those groups and play an active role in regional stability and development,” stated the Chinese State Councillor.

Earlier in June, at a meeting with his Afghan and Pakistani counterparts, Wang vowed to “bring the Taliban back into the political mainstream” and offered to host intra-Afghan peace talks.

“China’s position is that this should be resolved within Afghanistan. And the situation in Afghanistan should not threaten China’s security,” a source was cited by SCMP as saying.

Many governments in the region are increasingly concerned about the security repercussions of the US and coalition troop withdrawal from Afghanistan. Forces began the Afghan pullout in May, when US President Joe Biden promised to have all troops out of the country by September and the 20th anniversary of the 9/11 terror attacks. The latter had served as the pretext for the US invasion of Afghanistan in 2001.

Rich People Cry Too: A Guide to Korea’s Top-3 Dramas About Money and Power