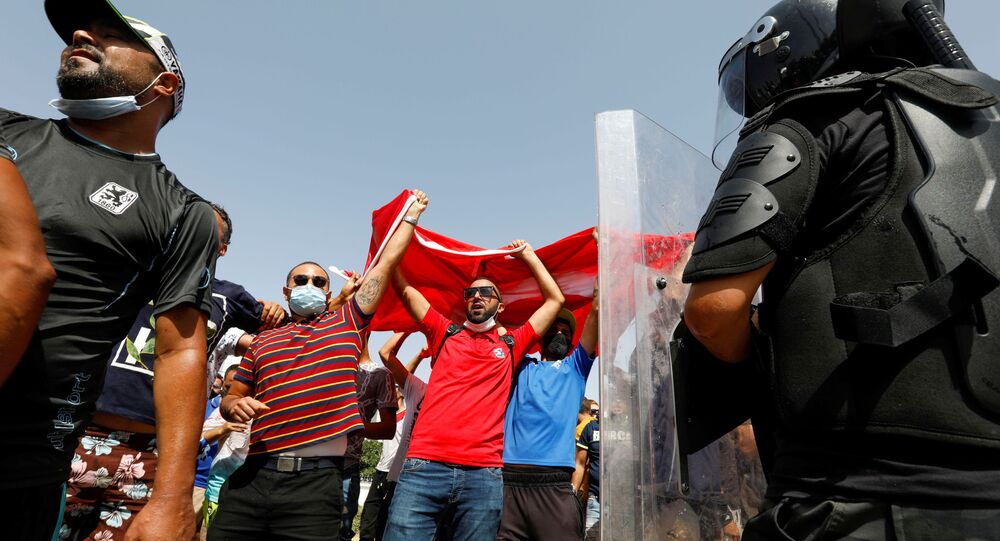 Tunisian President Kais Saied dismissed Prime Minister Hichem Mechichi and froze the country’s parliament on Sunday, with the move coming in the wake of large-scale anti-government protests over the economy and the handling of the coronavirus pandemic.

The decree, published in a communique by the presidential administration’s press office, follows Saied’s announcement Sunday that he would be removing the prime minister and freezing parliament for a 30 day period.

In his comments Sunday, Saied said he felt he should have made the decision to sack Mechichi “several months ago,” and clarified that he would assume executive authority with the assistance of a new prime minister, to be appointed at a later date. He specified that he had the authority to suspend parliament under Article 80 of Tunisia’s Constitution, which allows him to act if the nation is in “imminent danger.”

Sunday’s decision included a suspension of immunity for all members of Tunisia’s parliament, the Assembly of the Representatives of the People, and an order banning dozens of lawmakers from any attempt to leave the country.

Parliament Speaker and Islamist Ennahda Movement leader Rached Ghannouchi blasted Saied’s move, characterizing it as a “constitutional coup” and a coup against the “Tunisian revolution” of 2011. Ennahda is Tunisia’s largest party, holding 52 seats of the parliament’s 217 seats.

Saied warned Ennahda and others against any provocations, saying that if anyone “fires a single bullet, our forces will respond with a rain of bullets.”

Tunisians took to the streets of multiple cities over the weekend demanding that the government step down. Protests are thought to have been fueled by the Mechichi government’s failure to improve basic services, long-running concerns over unemployment, and frustrations related to the handling of the coronavirus pandemic. Following Saied’s decision to fire the head of government, troops surrounded the parliament building in Tunis and deployed outside the state television building to ensure security. According to local media, protesters also attacked Ennahda offices, and several of the party’s regional headquarters have been set on fire. On Monday, Qatar-owned television network Al Jazeera’s Tunis office was stormed by police.

Tunisia has been crippled by political instability and a severe economic crisis for years, with Saied, elected in 2019, engaging in back-and-forth wrangling with Mechichi, whom he appointed to the office in 2020 in a bid to gain the confidence of parliament after the previous prime minister, Elyes Fakhfakh, was entangled in a corruption scandal and resigned.

A social conservative who ran as an independent on a law and order ticket in the 2019 elections, Saied promised to resolve Tunisia’s endemic corruption and governance problems by allowing people to recall elected officials, and received support from both moderate Islamists and the country’s leftist forces.

The current constitutional crisis brings to mind the 2010-2011 uprisings against Tunisian President Zine El Abidine Ben Ali, which sparked the wider so-called ‘Arab Spring’ protests that would sweep several entrenched secular governments from the region, replacing them with moderate Islamist forces at best or, in the cases of Libya, Syria and Yemen, degenerate into foreign-backed brutal civil conflicts with no end in sight.

Western powers and media long hailed Tunisia as the Arab Spring’s sole real ‘success story’, but a decade after its ‘revolution’, the country failed to quash corruption and economic troubles, with an unemployment rate of over 20 percent predominantly affecting the country’s young people.

The Tunisian crisis has sparked concern from regional and global actors. On Monday, the European Union called for all sides to respect the constitution and the rule of law, and to “remain calm and…avoid any resort to violence in order to preserve the stability of the country.” The foreign ministry of Turkey, which has supported Ennahda heavily, said it was “deeply concerned” by the developments and called for the restoration of “democratic legitimacy.” Russian presidential spokesman Dmitry Peskov said the Kremlin was monitoring the situation in Tunisia, and expects that “nothing will threaten the stability and security of the citizens in this country.”

People Protest in Tunis Over COVID-19 Lockdown and Economic Situation

What is Known About the Military Base Where Mali Mutiny Originated