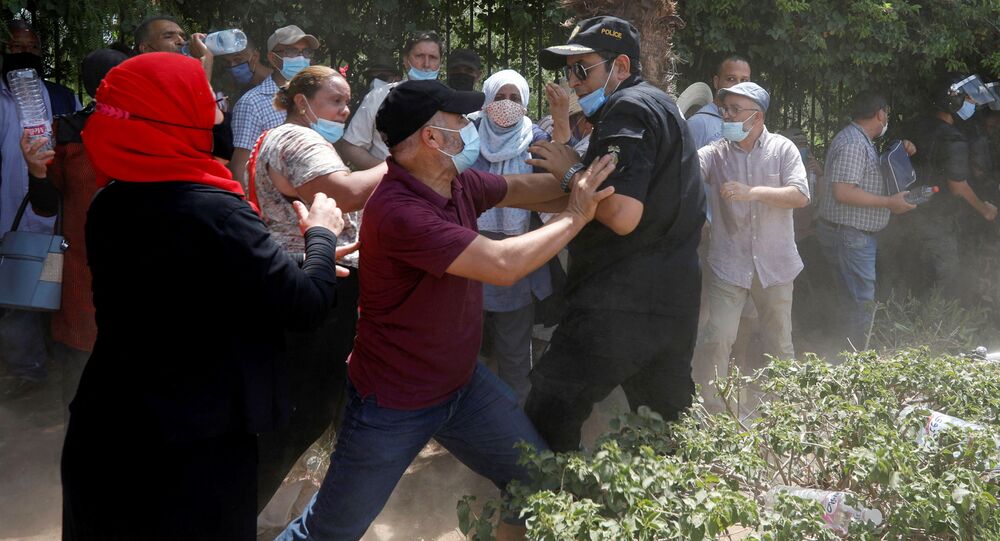 MOSCOW (Sputnik) – Supporters of Tunisian President Kais Saied are facing off against those of Ennahda, the largest political party in parliament, near the legislature building amid a prolonged political crisis, a Tunisian radio station, Shems FM, reported on Monday.

Parliamentary Speaker Rached Ghannouchi, who heads Ennahda, was not allowed to enter the parliament building, which was earlier today surrounded by Tunisian army forces, and is reportedly staying in his car nearby.

Supporters of the president and those backing Ennahda, a moderate Islamist party, were throwing stones and bottles at each other, with security forces trying to hold them apart, the Tunisian Mosaique FM radio said.

On 26 July, the Tunisian president, who ran as an independent, dismissed Prime Minister Hicham Mechichi, a member of Ennahda, froze the parliament for 30 days, and suspended the legal immunity of parliament members amid recent anti-government protests fueled by popular anger over inefficient handling of the COVID-19 surge. Saied said he would now assume executive power alongside a new prime minister, who is yet to be appointed.

Ghannouchi alongside other parties’ leaders accused the president of mounting a constitutional coup and a coup against the 2011 revolution. The president denied the accusations and reiterated that he was acting in full compliance with the law, since Article 80 of the constitution allows the president to suspend parliament if it is in “imminent danger.”

The Tunisian constitution provides for a sharing of executive power between the president, prime minister and parliament. The president and the parliament were elected in separate votes in 2019, while the prime minister took his office last summer. Since then there have been political disputes between Saied and Mechichi, with COVID-19 exacerbating the wrangling. Ennahda holds 52 out of 217 seats in parliament, which is still less than a quarter. In the fragmented Tunisian parliament, no party has more than 25% of seats, which adds to the political turmoil.