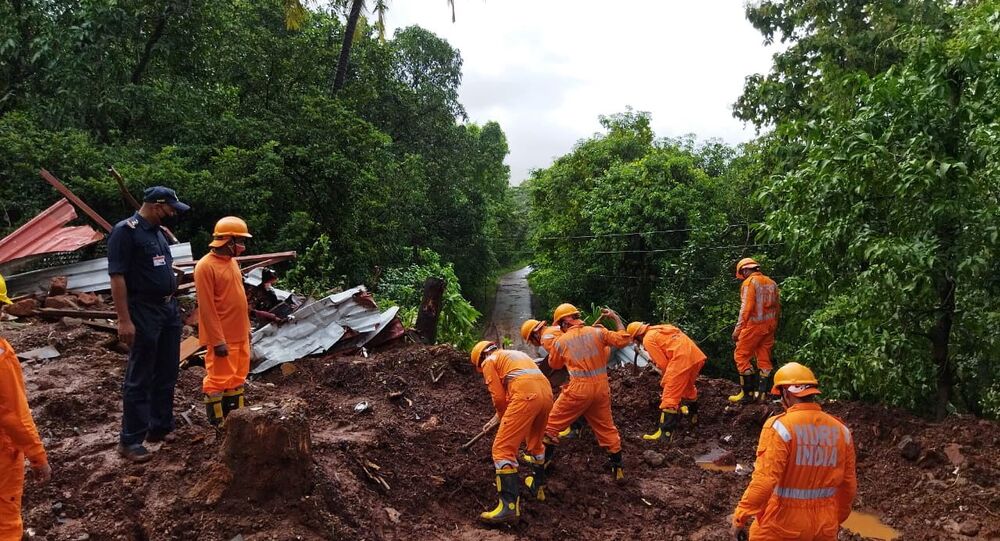 The country’s Western Ghats, including the States of Kerala, Tamil Nadu, Karnataka, Goa, Maharashtra, and Gujarat, have recorded their heaviest spell of July rains in decades. The downpour has caused floods and landslides in several places.

The death toll from flooding and landslides in India’s Maharashtra state has swelled to 159 and hundreds of others have been left injured, while over 60 people are missing, state government officials announced on Monday.

The officials also shared that hundreds of thousands of people have been evacuated since 21 July.

The Western Ghats have been overwhelmed by torrential rains since 21 July, with the India Meteorological Department (IMD) issuing a yellow alert.

​The situation has worsened in the State’s Raigad, Kohlapur, Palghar, Thane, Satara, Sangli, and Ratnagiri districts, after landslides and floods were reported on Thursday and Friday.

​The Indian army also set up a Central War Room to coordinate the three services for ongoing flood relief operations in Maharashtra.

A Central War Room has been established at Department of Military Affairs for close coordination between the three Services for ongoing #FloodRelief operations in #Maharashtra. #WeCare#HADR pic.twitter.com/kIT4fUkhxM

​”In Sangli, 196,957 people have been evacuated, while in Kolhapur, 145,930 have been taken to safe places and temporary shelters,” the district authorities said, sharing figures on Sunday evening.

In Raigad, Mahad’s Taluka (administrative district), villagers requested the calling off of a rescue operation on Monday for those who were trapped under the landslide, believing they must have died by now.

“The bodies should not be disturbed now, they should be declared dead,” Kishor Pol, a local resident, told The Indian Express.

Maharashtra state Chief Uddhav Thackeray is expected to conduct an aerial survey of Satara, Sangli and Kolhapur districts on Monday.

On Sunday, Thackeray said that a relief package would be announced soon — and a separate force on the lines of the NDRF will be set up in vulnerable districts to guarantee a swifter response during natural disasters.

Last week, the Maharashtra government announced an ex-gratia payment of $6,717 (INR 500,000) each to the families of those who have died in landslides triggered by heavy rains in different parts of the state.

Prime Minister Narendra Modi said he was “anguished” by the loss of lives.

“The situation in Maharashtra due to heavy rains is being closely monitored, and assistance is being provided to the affected,” he tweeted.

Anguished by the loss of lives due to a landslide in Raigad, Maharashtra. My condolences to the bereaved families. I wish the injured a speedy recovery.

The situation in Maharashtra due to heavy rains is being closely monitored and assistance is being provided to the affected.

‘No One is VIP’: British Actress Slammed for ‘Refusing COVID Treatment’ at Gov’t Hospital in India