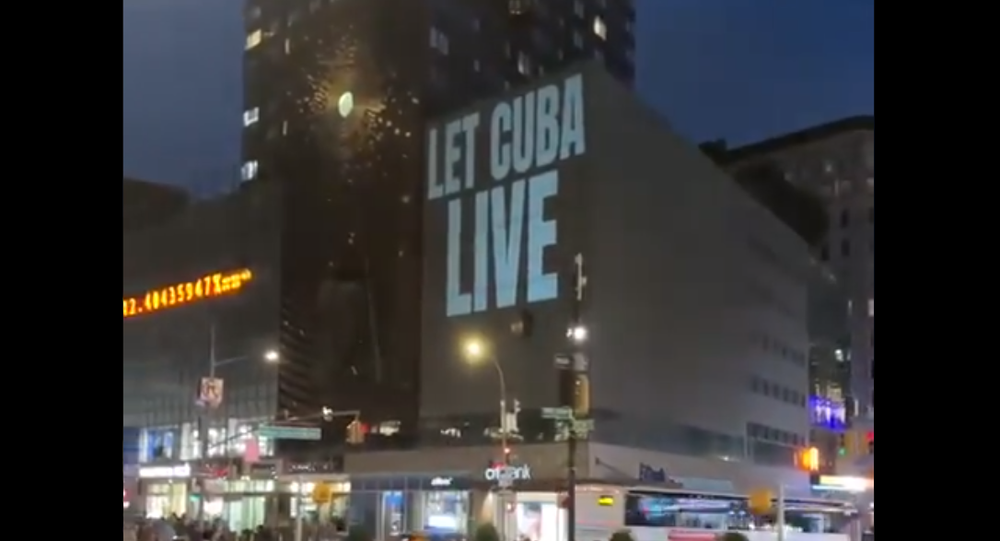 In the wake of protests in Cuba and the US both for and against the socialist government in Cuba, progressives from around the world published a letter in the New York Times urging US President Joe Biden to undo the range of sanctions imposed on the country by his predecessor, Donald Trump, and “let Cuba live!”

“It is time to take a new path forward in US-Cuban relations. We, the undersigned, are making this urgent, public appeal to you to reject the cruel policies put into place by the Trump White House that have created so much suffering among the Cuban people,” the letter to Biden says.

​“Cuba – a country of eleven million people – is living through a difficult crisis due to the growing scarcity of food and medicine. Recent protests have drawn the world’s attention to this. While the Covid-19 pandemic has proven challenging for all countries, it has been even more so for a small island under the heavy weight of an economic embargo,” it continues.

“We find it unconscionable, especially during a pandemic, to intentionally block remittances and Cuba’s use of global financial institutions, given that access to dollars is necessary for the importation of food and medicine.”

“‘We stand with the Cuban people,’ you wrote on July 12,” the letter notes. “If that is the case, we ask you to immediately sign an executive order and annul Trump’s 243 ‘coercive measures.’”

“There is no reason to maintain the Cold War politics that required the US to treat Cuba as an existential enemy rather than a neighbor. Instead of maintaining the path set by Trump in his efforts to undo President Obama’s opening to Cuba, we call on you to move forward. Resume the opening and begin the process of ending the embargo. Ending the severe shortages in food and medicine must be the top priority,” the letter says.

​The letter was signed by more than 400 activists, intellectuals, and organizers from around the world and took up two full pages in the US’ “newspaper of record”, which distributes about 375,000 print copies daily.

The ad was paid for by the People’s Forum in New York City, and the letter was organized in conjunction with women’s peace group Code Pink and the Act Now to Stop War and End Racism (ANSWER) Coalition.

Accompanying the letter was a huge projection on a building in New York’s Times Square on Thursday evening, also organized by The People’s Forum. The projection included slides that said “Let Cuba live,” “Stand with the people of Cuba? Unblock them!” “stop blocking food and medicine from the people of Cuba,” and “Cuba yes, blockade no” in Spanish.

Live from Union Square in NYC we’re joining @illuminator99 in collab with @codepink @answercoalition to say no to the US blockade of Cuba #LetCubaLive #UnblockCuba pic.twitter.com/fjEuF6xkyh

​Both the projection and the letter caught the attention of the Cuban government, with Cuban Foreign Minister Bruno Rodriguez noting it on Twitter and Cuban President Miguel Diaz-Canel thanking those behind it for “this beautiful hug to the Cuban people in the heart of New York.”

​Similarly, on Sunday a group of Cuban-Americans against the blockade are expected to complete a 1,300-mile trek from Miami to Washington, DC, bringing their message to Biden’s front door. They are being led by Carlos Lazo, a Cuban-American veteran of the Iraq War who in 1991 came to the US from Cuba on a raft across the Straits of Florida.

Lazo told Sputnik recently that along the way, he is “contacting and talking to every American that we can” to teach them about Cuba and the damage caused by the US embargo.”

“The embargo was established with intent of overthrowing the Cuban government,” he explained, “but all the measures implemented by the embargo really hurt innocent Cuban people. I have seen that for so many years.”

Biden Clamps Down After Protests

The letter stands in stark contrast to what US President Joe Biden has actually done since protests broke out in several Cuban cities on July 11 over new restrictions created by a worsening COVID-19 pandemic and shortages in fuel and medical equipment on the island.

Many of the protests in Cuba itself were not anti-government, but as Sputnik reported, there was a concerted effort across social and news media to portray them as the opening stages of a popular revolution. Taking cues from the media and from right-wing protesters in Miami and Washington, DC, who demanded harsher actions against the socialist government in Cuba, Biden announced new sanctions on Wednesday.

In 2015, late in then-US President Barack Obama’s second presidential term, the US relaxed some of its restrictions against Cuba and moved toward normalising relations with the country, including removing Cuba from the State Department’s list of state sponsors of terrorism and easing travel and trade with the island. However, many of the heavy restrictions put in place shortly after the 1959 Cuban Revolution remained.

In June 2017, Trump reversed Obama’s “thaw” and not only returned the removed sanctions but added hundreds of new ones, including enforcing all aspects of the Helms-Burton Act, allowing people to sue in US courts for damages if their property was seized by the Cuban government. The lawsuits can target both Cubans and foreign companies that do business on the island.

Restrictions were increased even further in 2019, after the US launched a failed attempt to overthrow Venezuelan President Nicolas Maduro by backing opposition legislator Juan Guaido, who claimed to be the country’s interim leader. Long-standing trade deals between the two nations saw medical aid to Venezuela and gas sales to Cuba shrink, causing shortages in both nations.

The vast majority of the world stands against the US blockade, which has affected the lives of every Cuban by causing acute shortages of basic necessities. Every year since 1992, the United Nations has voted overwhelmingly to condemn the blockade. On 23 June 2021, the latest vote saw 184 nations vote against the blockade, with just the United States and Israel voting in support of it.

‘Gets It Wrong Every Time’: Trump Says Biden Should Have Followed His ‘Plan’ on Afghanistan

Groups Involved in US Capitol Storming Received Over $500,000 in Bitcoin by French Donor