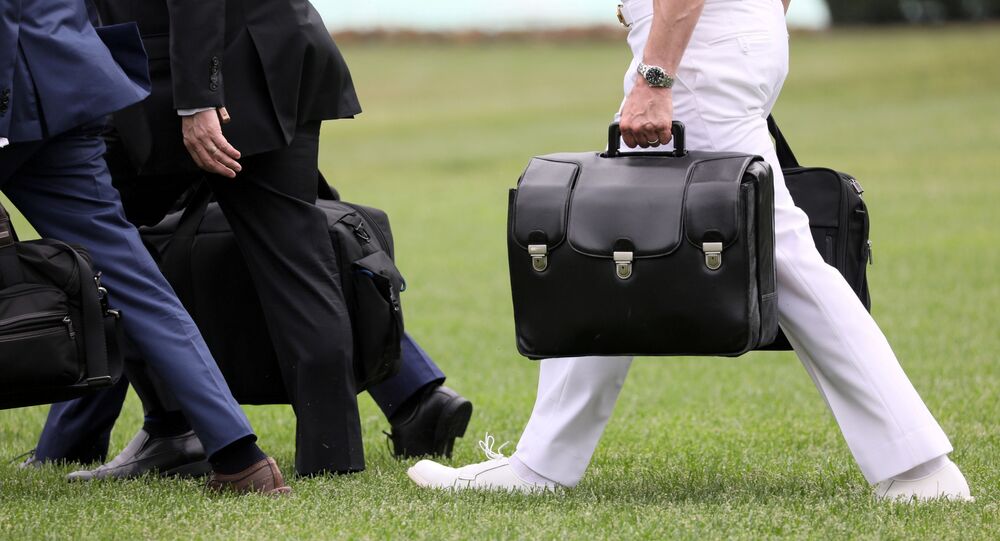 After it was revealed that rioters inside the US Capitol on January 6, 2021, were within moments of potentially laying their hands on the United States’ nuclear launch codes, the Pentagon ordered a review of its policies concerning the device, commonly known as the “nuclear football.”

Its formal name is the Presidential Emergency Satchel – the 45-pound briefcase the US President or Vice President would use to order the use of nuclear weapons, should the unfortunate situation come to pass. If necessary, a nuclear weapon or weapons could be launched in as little as two minutes’ time. It’s carried by an aide-de-camp whenever one of the executives is away from a permanent command post, such as when former US Vice President Mike Pence went to the US Capitol on January 6 to fulfill his duties as President of the Senate in the certification of Electoral College voting results from the November 2020 election.

Then-US President Donald Trump’s supporters, intent on forestalling certification of a victory by Joe Biden that they – and Trump – had deemed to be illegitimate, fell upon Capitol Police in the thousands, breaching the building and temporarily scattering Congress. Lawmakers scrambled to safety as police officers struggled with pro-rioter sympathy in the ranks. Security camera footage from the event shows that at one point, the insurrectionists were within just 100 feet of Pence and his entourage and chanting “Hang Mike Pence.” Outside, a gallows was being erected.

According to CNN, US Strategic Command, which is responsible for operating the nuclear weapons arsenal, only became fully aware of the danger weeks later, when security camera footage shown during Trump’s impeachment trial for allegedly egging on the attack was aired.

Kingston Reif, an expert on nuclear weapons policy at the nonpartisan Arms Control Association, told CNN in early February that “The risk associated with the insurrectionists getting their hands on Pence’s football wasn’t that they could have initiated an unauthorized launch. But had they stolen the football and acquired its contents, which include pre-planned nuclear strike options, they could have shared the contents with the world.”

Since Trump was commander-in-chief, only he could actually order a nuclear strike, unless he was compromised and Pence rose to fill his office. Pence was also accompanied by several armed Secret Service bodyguards, who would undoubtedly have given their lives to defend the VP and the nuclear football, but even they wouldn’t have been able to hold back a determined assault by the rioters.

“Such an outcome would have been a security breach of almost incomprehensible proportions,” Reif added, “and it ought to raise further questions about the rationale for the anachronism that is the football.”

Trump’s Victory Would Have Been ‘Threat to My Freedom’, Hunter Biden Claims in New Book