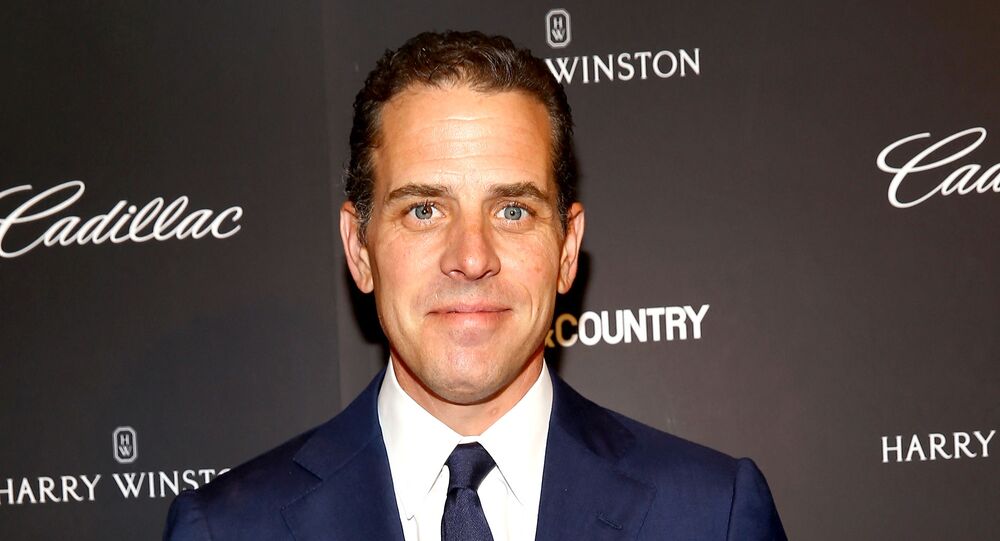 Joe Biden’s second son has been in the media spotlight since last October, when the New York Post published an exposé on him alleging that the elder Biden was involved in his son’s business dealings overseas during his stint as vice-president, which the newspaper said might be interpreted as a conflict of interest.

The Washington Post has published an op-ed about Hunter Biden in which it mocked various ethical scandals the president’s son has been involved in. The outlet’s story featured five paintings, which parodied the real exhibition in Manhattan, where Hunter’s works will be displayed.

One of the mock paintings titled “From the Heart” reads “I love Burisma”, referring to the time Hunter served on the board of directors of Ukrainian gas company Burisma, which was once investigated for corruption.

Last October the New York Post released an exposé, citing information it obtained from a laptop purportedly belonging to Hunter Biden that he seems to taken to an IT repair store in 2019, but never returned to collect.

The story included emails, which showed that Hunter Biden had reportedly arranged a meeting between Vadym Pozharskyi, an adviser to the board of Burisma, and his father Joe, when the latter was serving as vice-president to Barack Obama. The story contradicted Joe Biden’s stance that he was never involved in his son’s business dealings.

Another parody painting titled “The Treachery of the Foreign Corrupt Practices Act” shows a framed 100 Chinese Yuan banknote with a caption “this is not a bribe”, which is a reference to reports that Hunter asked for money from Beijing, while promising that his father would improve US policy on China.

Still another mock painting titled “Painters Who Would Appear in This Gallery if Not Named Biden” showed an empty frame.

Screenshots of the op-ed were posted on Twitter by the outlet’s correspondent Glenn Kessler, who is in charge of the Washington Post’s Fact Checker section, which assesses how true statements made by politicians are.

​However, the newspaper’s attempts to draw attention to alleged corruption have backfired as numerous social media users reminded the outlet that it itself dismissed last October’s exposé on Hunter Biden as Russian disinformation.

It would be even more funny if the WaPo didn’t call these same suggestions Russian disinformation to protect Biden during the election.

Wait, I thought this was disinformation? What changed?

​Others said that the Post’s story came too late and reminded Kessler that he didn’t stand up for his colleagues in the New York Post.

Too bad you didn’t stand up for fellow journalists at NY Post and others who tried to raise these issues before the election, and were kicked off of social media/censored for doing so.

​Others accused the newspaper of printing stories that fit its own political agenda.

WP doing what it does best, op-ed, cause you don’t do any real reporting, you just slant your stories to fit your own political agenda. You and @HarveyLevinTMZ at @TMZ compete for sensationalism stories. No surprise you previously gave Hunter and Joe a pass…

​The development comes almost two weeks after the Washington Times reported that the White House had struck a deal to withhold the names of bidders and buyers at the art auction, where Hunter’s works will be sold. The White House said the arrangement will prevent buyers from seeking political influence with the Biden administration.

However, former director of the Office of Government Ethics Walter Shaub, who served under Barack Obama, called the news “very disappointing”.

“So instead of disclosing who is paying outrageous sums for Hunter Biden’s artwork so that we could monitor whether the purchasers are gaining access to government, the WH tried to make sure we will never know who they are,” Shaub tweeted in a statement on Twitter.