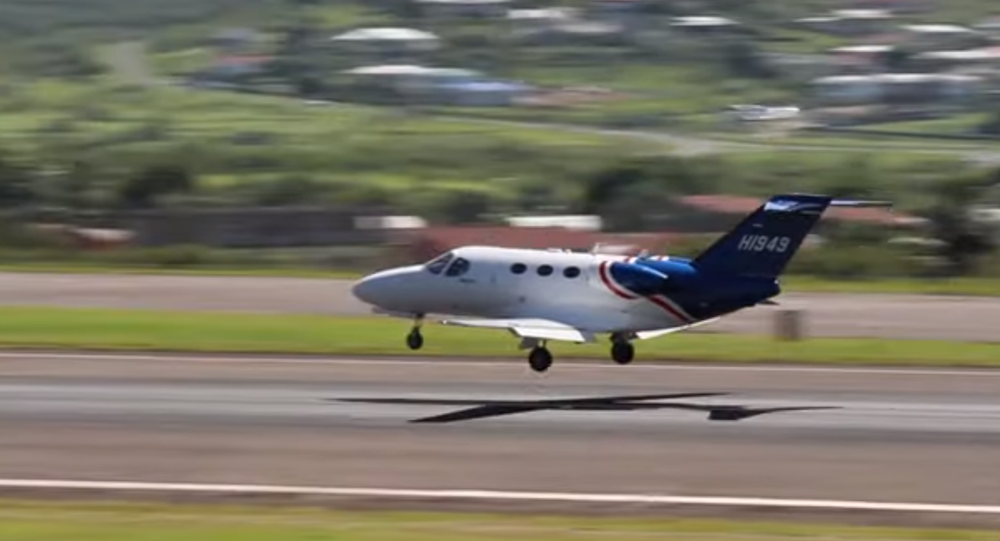 When news broke that Haitian President Jovenel Moïse had been killed by a hit squad, analysts quickly drew parallels to the 2020 “Bay of Piglets” attempt to kidnap Venezuelan President Nicolas Maduro by hired mercenaries, and revelations by Haitian police that many of the accused men hailed from Colombia only hardened those suspicions.

The aircraft in question is a Cessna Citation Mustang four-seater small business jet with the tail number HI949. Back on May 15, 2020, when the aircraft took off from Maquietta, Venezuela, the aircraft tracking service AeroNoticiasVE noted on Twitter that the same aircraft had transported Guado’s team to Barbados in September 2019 for peace talks with representatives from the government of Venezuelan President Nicolas Maduro, who Guaido has attempted to overthrow.

​This aircraft, it was reported, also transported three alleged members of the commando unit that shot to death Moïse and injured his wife, Martine, early on the morning of July 7 in their home on the outskirts of Port-au-Prince. One of them was allegedly Christian Emmanuel Sanon, who Haitian National Police (PNH) have said was the mastermind behind the assassination plot.

The aircraft is owned by Helidosa, an airline in the Dominican Republic. CEO Alex Castillo said in a statement obtained by Haiti Libre that the three passengers “passed all the immigration controls in the airports by which they left and entered and that his company had no means of establishing that those who used his services had criminal ends,” according to the outlet.

“We are not a security agency, or an investigative agency to be able to know it,” Castillo said. He revealed that his airline was also responsible for transporting Martine Moïse to Florida for treatment after the attack, as well as for transporting former Haitian President Jean-Bertrand Aristide to Cuba last month for emergency COVID-19 treatment. He noted the company has 15 planes and 24 helicopters.

However, this isn’t the first connection between the assassination plot and the Venezuelan opposition: Venezuelan National Assembly Speaker Jorge Rodriguez said last week that CTU Security, the mercenary group allegedly contracted for the hit job, was also behind the 2018 attempt to assassinate Maduro with exploding drones during a speech. He added that it was also connected to the 2020 attempt by Silvercorp mercenaries from the US to kidnap Maduro, which was paid for by Guaido’s US-backed ersatz government.

The PNH says they have arrested 20 men connected to the assassination plot, 18 of whom are Colombian and two of whom are Americans. Many of the Colombians have been confirmed to be former military personnel, some of whom received training from the US military as part of their service, while one of the Americans was a former informant for the US Drug Enforcement Agency (DEA), a federal police agency that also works extensively in Colombia.

On Monday, Claude Joseph, the former acting prime minister who was nonetheless recognized as the de facto leader of Haiti by the United Nations and the US after Moïse’s killing, announced he would step aside in favor of Ariel Henry, who Moïse appointed to replace Joseph just a day before the assassination. Thus, the new government will have a prime minister, but no president until the elections scheduled for later this year.

While in power, Joseph appealed to the US and UN for troops to defend the country’s vital infrastructure, but so far those requests have been denied, in part because of their lack of specificity. However, the US has sent some federal police officials to evaluate how the US can help the investigation.

For months before Moïse’s death, millions of Haitians had been protesting in the streets in spite of deadly police and gang violence, demanding that Moïse step aside in line with a Superior Court ruling that his presidential term had expired. Moïse had ruled by decree since early 2020 after allowing most of parliament’s terms to expire without calling new elections and had planned a new constitutional referendum that critics said aimed to cement his hold on power. Despite this, the US and Organization of American States Core Group continued in their support for Moïse.

Bolsonaro Pledges to Be ‘Back Soon’ After Hospitalization, But Could Receive Emergency Surgery