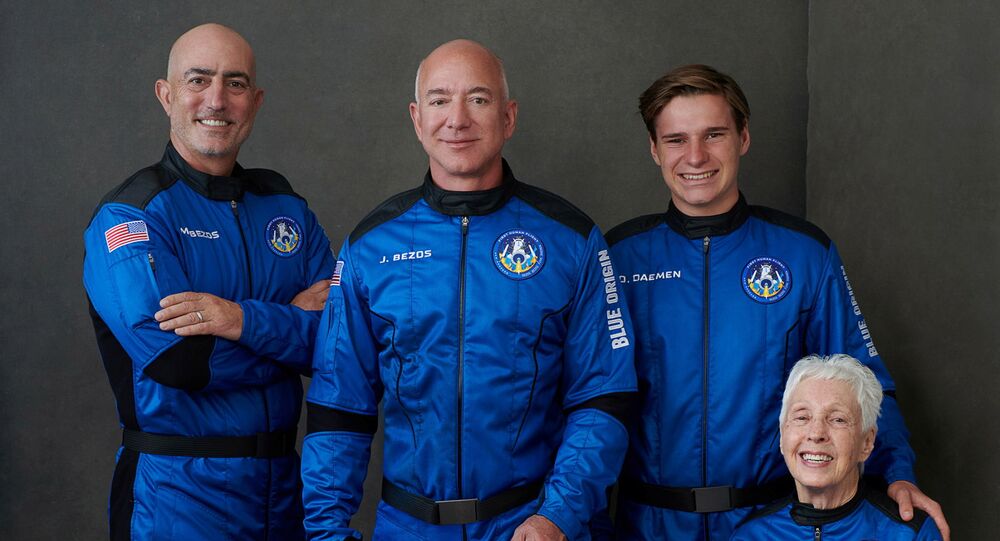 On Tuesday, the Amazon founder made a short journey into space aboard the rocket ship New Shepard manufactured by his company Blue Origin. Bezos was accompanied by his brother Mark as well as female aviator Wally Funk, 82 and Oliver Daemen, 18, who became the oldest and the youngest person to fly into space respectively.

Jeff Bezos has become the latest billionaire to reach the edge of space. Yet, instead of praise for attempting to simplify space travel, the world’s richest person was mocked online for the comment he made upon returning to Earth. During a news conference Bezos thanked Amazon employees and customers for funding his space voyage.

His comment was first roasted by the US media, which noted that the $28 million ticket to space aboard the New Shepard rocket could have been spent on much important issues, before social media users began ridiculing him.

Remember kids: if you study hard, get good grades, go to a good college, get a job, work hard, never take a sick day, live within your means and do what you’re told … then one day your boss might go to space

​Many users drew attention to what they described as poor working conditions at Amazon.

“Without slave labor, I never would have made it to almost-space.”

“Thank you for peeing in bottles, crapping in bags and buying into my anti-union propaganda so I could take a ride really high!”

​Others remembered a report by ProPublica in June that said Bezos, who according to Forbes’ real-time billionaires’ list is worth $200 billion, paid no taxes in 2007 and 2011.

During the pandemic, every 11 minutes, he got about 1.6 million dollars richer

All while, Justin Trudeau allowed Amazon to pay $0 in taxes

​There were those who said there was nothing wrong with Bezos’ comments.

Did anyone put a gun to Amazon customers heads? I don’t think so. If he wants to spend the money he made to go to space then more power to him. I seriously fail to see the issue.

You’re welcome Jeff!!! I will make sure to buy double the amount of items during next year’s Amazon Prime day, ensuring the possibility of you going up to space again! I couldn’t be more proud and honored to be an Amazon customer!

Still other users made fun of Bezos’ decision to wear a cowboy hat during his space trip.

Jeff Bezos leaving the #NewShepard capsule in a cowboy hat strangely reminded me of this. pic.twitter.com/U75cfxZYxr

​Bezos’ space trip came nine days after another billionaire, founder of the Virgin Group Richard Branson flew to space on board a rocket manufactured by his company.

‘You Look Like a Freshman’: Netizens Divided Over Biden’s Apparent Compliment to Arizona Nurse