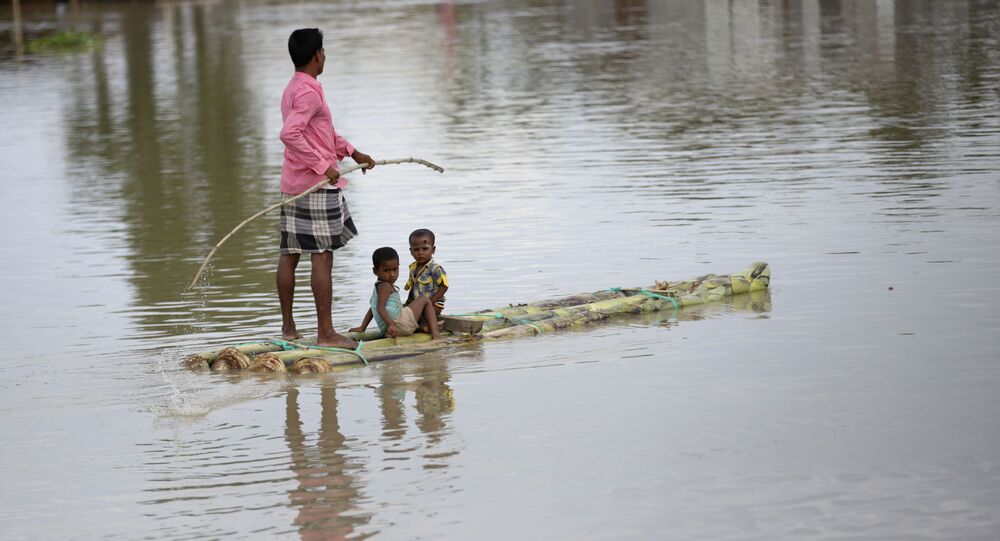 According to official statistics, India has a population which has exceeded 1.3 billion, making it the world’s second-most populous country after China (1.41 billion people). Estimates from the United Nations are now suggesting that India’s population may even overtake China’s by 2026.

India’s most populous state Uttar Pradesh is now introducing a bill to control its population. The bill proposes denying government jobs, subsidies and the right to contest local elections to anyone who has more than two children. So far, 12 Indian states have introduced some version of a two child-policy.

But the controversial bill poses many questions as India has one of the highest female foeticide incidents in the world. The government wants to control the population, but a skewed sex ratio 943/1000 shows another horror story.

Professor Amitabh Kundu, a senior fellow at the World Resource Institute in India, who has done extensive research India’s population and the challenges it poses, discussed the matter with Sputnik.

Sputnik: India’s population is expected to overtake China’s in five years. What are the challenges India will face?

Amitabh Kundu: The challenges associated with a large population, along with a high percentage being in the 0-19 age group, is enormous in the context of providing child health and education facilities, skill development, creation of decent employment opportunities etc.

However, these can be matched by realising the demographic dividend enjoyed by India because of its youthful workforce. This is particularly so in the next couple of decades, until the share of the elderly rises and comes closer to that of China or other middle-income countries.

Sputnik: When is India’s population expected to stop growing?

Amitabh Kundu: Recent trends in demographic parameters by the National Family Health Survey (NFHS) show the most alarmist projections about fertility and population growth. Barring a few states in northern and central India, most have already recorded the Total Fertility Rate (TFR) of 2.1 when two children replace a couple.

However, because there is a large proportion of women in the reproductive age group, the Indian population is predicted to stabilise and start declining after 2045, although trends suggest that this could happen even earlier.

Unfortunately, family planning initiatives have had limited success, with no significant rise in the coverage through contraceptive practices.

The factors behind the reduction in TFR are a rise in the age of marriage, better female education and empowerment. A decline in how many women participate in work is a matter of serious policy concern as that would prevent lowering the fertility rate and lessen the demographic dividend.

Sputnik: What kind of changes do you suggest for controlling the population?

Amitabh Kundu: The National Population Policy 2000 envisages a holistic approach, emphasising the need to meet certain health and educational targets, empowerment of women, creation of awareness and strengthening of the family planning system. As a signatory to the International Conference on Population and Development (1994), India is committed to these goals.

Two-child norms being carried into administrative and policy domain and linking this to access to government jobs, statutory positions etc. can be counterproductive, adversely affecting the poor and vulnerable, including women.

Sputnik: Two Bharatiya Janata Party-governed states Assam and Uttar Pradesh are adopting a population policy. This is not the first time BJP leaders have called for it.

The provisions in Uttar Pradesh’s policy, released on World Population Day, are similar.

However, the proposed disqualification of people in government jobs or public and elected positions etc, shift the responsibility of family planning from state and society to the individual, without recognising that individuals mostly respond to the socio-economic compulsions confronting them. This would be particularly discriminatory for the depressed minority population and a big blow to female empowerment.

Sputnik: Will this new norm make people adapt to the idea of having a smaller family?

Amitabh Kundu: A strategy to bring the TFR down in 72 districts which are at present recording high values – many of which have high percentages of Muslims – would be seen as targeting minority communities and creating social tension.

Such targeting may not be unwelcome if the strategy is holistic and dwells on the key determinants of fertility: health, education, gender empowerment, poverty reduction, and meeting the unmet needs of family planning.

Forced implementation of the two-child norm would increase the number of abortions of girls and also violence within the family since the blame for not having a boy is often placed on the mother in traditional societies in India.

This would also further strengthen the unfortunate trend of women being sterilised – it is worth noting that, whereas 36 percent of married women between the ages of 15 and 49 underwent sterilisation as opposed to less than 1 percent of married men aged between 15 and 54, according to the National Family Health Survey IV.

Sputnik: Have you seen any behavioural changes in people with regards to family planning?

There has been a significant increase in girls attendance in schools and colleges and those willing to enter the workforce. Although TFR among Muslims is higher than that of the Hindus, there is a clear trend towards convergence, a faster decline in the growth rate of a minority population.

Also, the impact of primary education in reducing fertility is very high among minority women. Gender empowerment is yet another positive development, but this, unfortunately, has been confined to the upper and middle class and is not yet much encountered among the poor and vulnerable women.

No-Deal Brexit is ‘the Best Option for the UK at the Moment,’ Analyst Says

‘The End Result of Lockdown Will be Far Worse Than Anything Gained From it’, Says Politician

Brexit: Johnson ‘Lacks Ambition’ and ‘Needs to Put the Great Back Into Great Britain’, Pundit Says