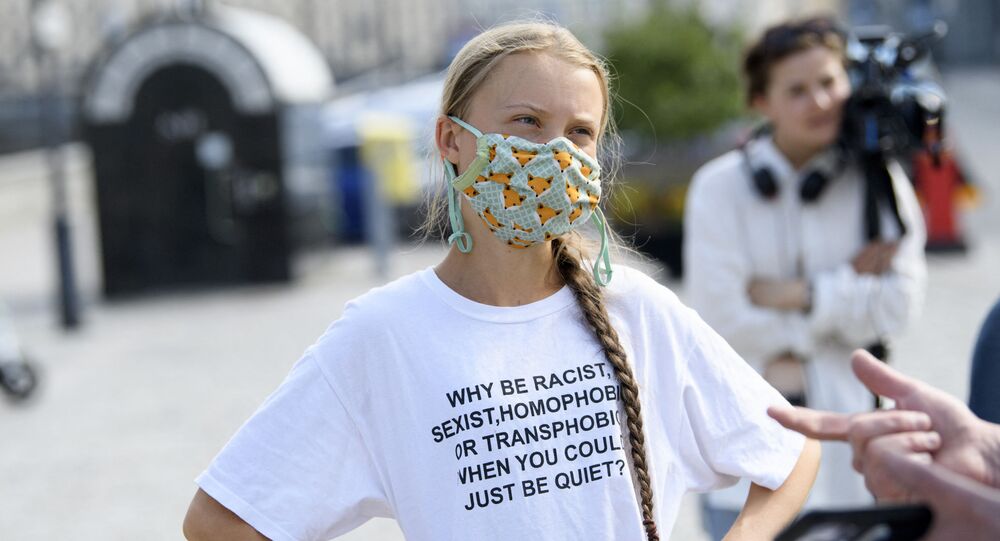 On social media, many found the idea of a climate icon siding with a convicted felon rather unbecoming, yet highly indicative of our era.

Climate activist Greta Thunberg has caused a stir after posing for a vacciation campaign ad with a criminal Somali-born gangster rapper, who happens to be a convicted felon.

In the photograph published as part of the “Roll up your sleeve” campaign, which urges Swedes to vaccinate themselves against COVID-19, Thunberg is seen in the embrace of rapper 1.Cuz, who is two heads taller.

1.Cuz is considered a burgeoning star of the Swedish rap scene and is known for always wearing a mask as an image gimmick and never revealing his real name. In an interview, he admitted having served two years in prison for a felony, but declined to reveal his conviction, describing it as “a serious crime with a severe punishment”.

His lyrics and music videos tend to heavily focus on gang-related crime, drug trafficking, and hatred of police as recurrent themes.

On social media, the photo sparked strong reactions, with some arguing 1.Cuz and Greta Thunberg, who rose to fame as a teenage activist and has since become the face of the global climate movement, make a “sick combo”, while others suggested that the photograph was “as unpleasant as it was inappropriate”.

“If you want a time imprint and a picture proof of how derailed Sweden had become in 2021, this picture will be excellent in the history books in the future”, one user noted in the Instagram comments field.

“Greta and a gang criminal. Good taste!” another one chimed in.

“Is this for real?! I’m rolling down then!” yet another one reacted.

Other users admitted to being “creeped out”, suggesting that Greta looks as if she has been taken hostage.

Journalist Ivar Arpi described the snapshot as “our age in a nutshell”.

​The privately-funded campaign “Roll up your sleeve”, where famous people urge the public to get vaccinated against COVID-19, has come under fire for “boosting celebrities’ egos”, as Göteborgs-Posten columnist Björn Werner put it. Werner also mused that the campaign is largely ineffective due to Swedes’ high willingness to vaccinate themselves and even borderline dangerous as it may risk further alienating sceptics.

Incidentally, this is not the first time Greta Thunberg and 1.Cuz have teamed up for a campaign photo. In 2020, the criminal rapper made an appearance in support of her Fridays for Future protest, in which school kids were urged to walk out of their classrooms and demand more strenuous climate action from their governments.