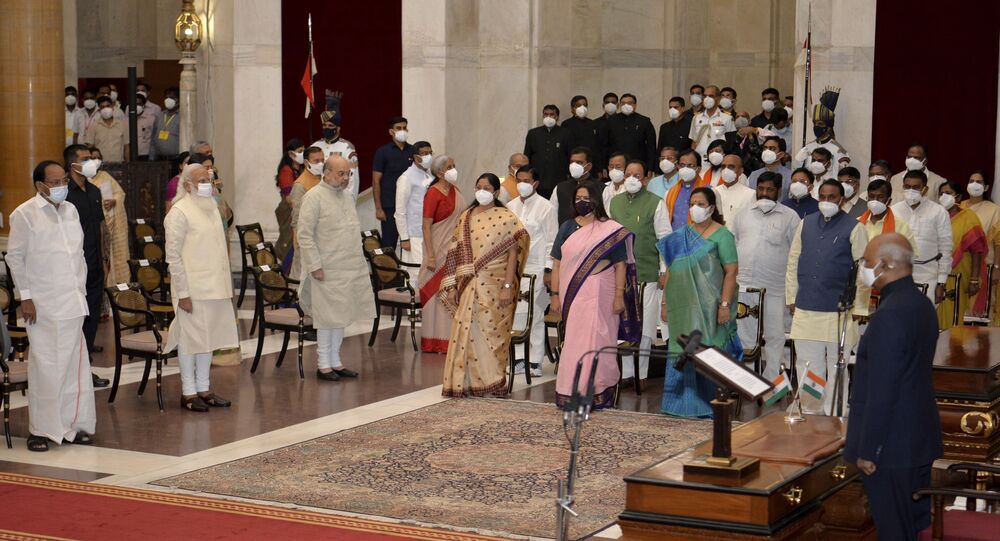 A major Cabinet shake-up was done by Prime Minister Narendra Modi on Wednesday, with 36 new ministers joining the government. The mega Cabinet rejig in India saw four high-profile ministers quitting their posts, including both the senior and junior health ministers, the education minister, and the minister of electronics and information technology.

The new Council of Ministers, sworn in on Wednesday, showcases a shift in the functioning of the Narendra Modi-led government that appears to be focused on laying new groundwork.

A number of key portfolios including health, law, information technology, and railways have gone to new ministers and junior ministers who were elevated to Prime Minister Modi’s Council of Ministers.

The total strength of the Council of Ministers is now 78, including the prime minister. There are now 30 Cabinet ministers versus 21 earlier and the number of junior ministers has gone from 23 to 45.

Jyotiraditya Scindia, a member of the Rajya Sabha, the upper house of parliament, has a BA from Harvard University and an MBA from Stanford University, and another parliamentarian Ashwini Vaishnaw is a graduate from the Wharton School of Business and the prestigious Indian Institute of Technology, Kanpur, besides holding an MBA from the University of Pennsylvania.

Took charge as Cabinet Minister of Railways today. Once again from the core of my heart, I extend my gratitude to Hon’ble PM @narendramodi ji for entrusting me this responsibility.@RailMinIndia pic.twitter.com/OvhRwVHFNX

​R.P. Singh, a parliamentarian from the upper house of parliament, is another seasoned professional who has a post-graduate degree in international relations from the Jawaharlal Nehru University in Delhi and was a senior Indian Administrative Officer (IAS) before joining politics.

S.P. Singh Baghel, another parliamentarian, has a PhD in military science apart from a law degree. Rajeev Chandrasekhar, from the state of Karnataka, studied advanced management at Harvard.

It is now also the youngest-ever council: 14 ministers are under 50. For instance, Nisith Pramanik, the youngest minister is 35, Anurag Thakur and Shantanu Thakur are 38, and Mirzapur parliamentarian Anupriya Patel is 40.

The average age of the new council of ministers is 58 compared to 61 in the last council.

Most of the ministers dropped from the council by Prime Minister Modi were over 60.

In contrast, none of the ministers sworn in after the 2019 parliamentary elections was under 40 years of age. In the previous council, there were just six ministers below 50, and 16 below 60 compared to 36 ministers in the current council.

There are 11 female ministers from across nine states, as well as two female Cabinet ministers.

“The BJP walks the talk on inclusivity. We choose to go with the constitutional definition of who can be defined as a minority, while the opposition parties only consider Muslims as minorities. It is for the first time probably that proper presentation has been given to all communities”, said former parliamentarian and BJP spokesperson Bizay Sonkar Shastri.

As the country braces for a third wave of COVID-19 following a devastating second surge, 49-year-old Mansukh L Mandaviya, from Prime Minister Modi’s home state of Gujarat, has been tasked with leading the containment efforts, as the head of the crucial Health Ministry. His junior minister will be Dr Bharati Pawar.

“This is a signal to leaders across parties that those joining the BJP will be richly rewarded for taking the political plunge of shifting their loyalties. Rahul Gandhi has recently mocked his former close aide Jyotiraditya Scindia who ditched Congress to join the BJP, calling him a backbencher in the BJP. Scindia has been pulled to the forefront to take charge of the Ministry of Civil Aviation”, political analyst Hamir Singh told Sputnik on Thursday.

“The same is the case with the leaders of Trinamool Congress in West Bengal who ditched Prime Minister Modi’s archrival, chief of West Bengal state Mamata Banerjee. Nisith Pramanik has been made a minister despite his young age”, he added.

Three of the four leaders from the state of Maharashtra who received ministerial portfolios are former Congress and Nationalist Congress Party (NCP) politicians. This includes Bharati Pravin Pawar, the new junior health minister who joined the BJP in 2019 after quitting the NCP.

Former Jammu and Kashmir State Chief and Family Are Under House Arrest, He Claims