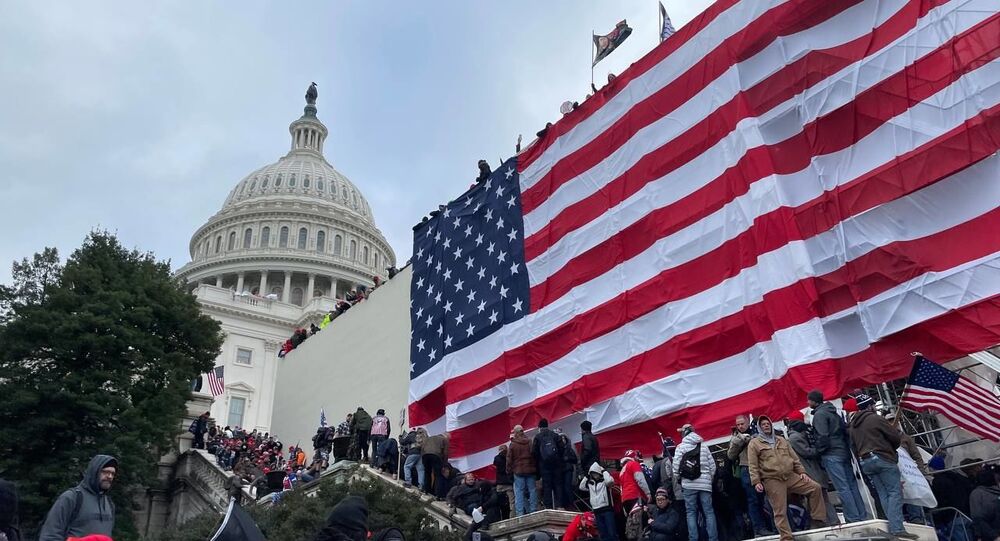 Last week’s Tucker Carlson show about the FBI’s role in the 6 January DC riots prompted a huge wave of criticism in the US mainstream press that immediately labeled the Fox News host as a “conspiracy theorist”. Commenting on the unfolding fuss, US independent journalist Glenn Greenwald remarked in his blog post that regardless of the MSM efforts to shield the bureau, the question as to why the FBI failed to prevent the 6 January Capitol breach is still sounding alarm bells.

“Given the numerous FBI failures, Greenwald’s may be the most important question Americans should be asking. How could the FBI have allowed January 6 happening?” asks investigative journalist and founder of Crowdsource the Truth Jason Goodman.

Goodman excludes the possibility of the FBI being unaware of the upcoming storming of the Capitol. He refers to his earlier interview with John Earle Sullivan, 26, a participant of the breach, who stated that the storming plan had been discussed on social media prior to 6 January.

“Surely if Sullivan knew that, the FBI should have,” Goodman believes.

Furthermore, as Rep. Carolyn B. Maloney of New York revealed to the House Oversight Committee and the Reform Committee last Tuesday, the social platform Parler sent the FBI evidence of planned protests in DC on January 6 including “specific threats of violence being planned at the Capitol”.

​”Logic dictates, either the FBI was asleep at the wheel again or they did not want to prevent the incident,” the investigative journalist says.

However, it appears that the FBI’s role in the breach could be bigger than that. Tucker Carlson’s show came on the heels of the Revolver News publication that documented evidence of FBI infiltration of the so-called “white supremacist” groups. Thus the media outlet drew parallels between the 6 January Capitol Siege and a botched kidnapping of Michigan Governor Gretchen Whitmer. Citing the FBI’s affidavits, Revolver News underscored that the bureau used a lot of informants and agents in the “Whitmer Kidnapping Plot”.

“FBI infiltrators comprised, at the very least, 26 percent of the plotters. That is, at least five FBI operatives have been disclosed, against just 14 suspects indicted,” the media outlet wrote, adding that many of those allegedly involved in the plot appear to belong to the “Three Percenters”, one of the militia groups now blamed for breaching the Capitol building.

For his part, Greenwald cited earlier reports saying that Proud Boys leader Enrique Tarrio has also served as an FBI informant in the past. According to the independent journalist there is nothing particularly new about the FBI’s using informants and instigators in their operations. He does not rule out that the three key groups at the centre of the 1/6 investigation — the Oath Keepers, the Proud Boys, and the Three Percenters – were infiltrated by the FBI.

However, what’s worse, according to Greenwald, is that on some occasions the FBI create, design and fund apparent “plots” to use them as bait for mentally and emotionally unstable people. The independent journalist quoted a TEDTalk by Aaronson, which “reveal[ed] a disturbing FBI practice that breeds terrorist plots by exploiting Muslim-Americans with mental health problems”. He also referred to a 2011 Mother Jones investigation, “The Informants,” which posed an unorthodox question as to whether the FBI is “busting terrorist plots – or leading them”.

“Although people may not realise this, the FBI has a long history of using ‘informants’ that appear to be active participants, or even instigators of crimes,” says Goodman. “Such agent provocateurs have been used on far more occasions than the public realises. I’ve personally spoken to one individual who has spent 18 years in prison and unequivocally states that he was ‘set up’ by an FBI informant.”

Twitter’s Labelling Spree Against Russia & China Will Have an Opposite Effect, Observers Foresee