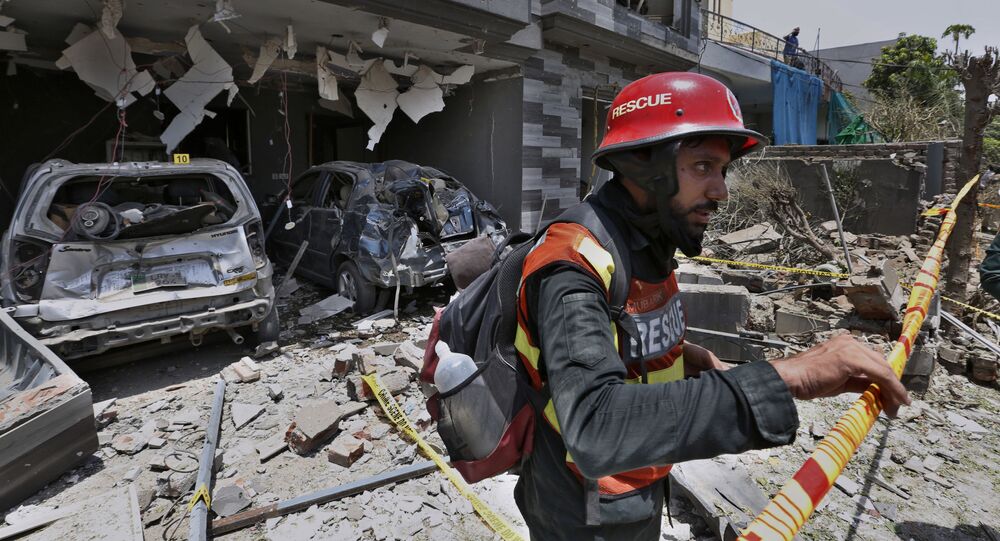 It was a regular day in Lahore, Pakistan until a loud explosion ripped through the Johar Town area of the city. Local police rushed to the area and sealed it for further investigation. Ambulances arrived to assist people with injuries.

At least three people died and 23 have been injured in a blast in Lahore, Pakistan on Wednesday, Punjab Inspector General Inam Ghani said.

At first, the explosion was suspected to have occurred due to a gas pipeline blast in one of the houses in Johar Town. Speaking to media, however, eye witnesses revealed that a random motorbike was parked in the area that later exploded.

Reports circulating in the regional media further suggest that the site of the blast is close to the residence of Hafiz Saeed, chief of the terror organisation Lashkar-e-Taiba.

​The blast has damaged buildings in the area and shattered glass windows, a report by Geo News said.

Visuals from the site of the incident have surfaced on social media. Locals can be seen moving here and there in haste, helping each other. The visuals also show the damage that has been caused in the area due to this explosion. Police officials can be seen asking people to stay away from the site.

If true
this will be 2nd gas pipeline explosion in Lahore in 2 days
and dear @reportpemra plz take action against channels which had already declared it as a bomb blast https://t.co/4Y1XIfrWH8

LAHORE: An explosion occurred in a house in Lahore’s Johar Town’s area pic.twitter.com/gV6PbyV3iX

​Investigations to find out the cause of the explosion have been opened by Lahore police. Bomb disposal squads have also reached the site to assess the situation.

Those who sustained injuries have been rushed to the hospital.

Following the incident, Chief Minister Punjab Sardar Usman Buzdar has asked the Inspector-General of Police to submit a detailed report of the blast to him.