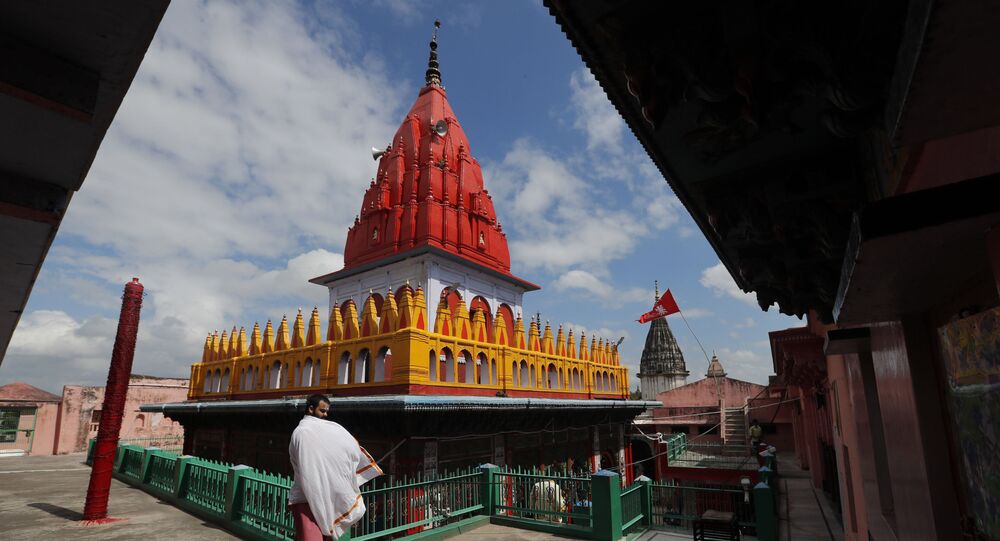 The Supreme Court of India cleared the way for the construction of Ram Temple in Ayodhya, a city in the Indian state of Uttar Pradesh, in November 2019. Based on the court judgement, the Narendra Modi government set up a trust to collect donations from the general public across the country to build the temple in Ayodhya by 2024.

The Shri Ram Janmabhoomi Teerth Kshetra Trust has been accused of pulling off an illicit land deal in Ayodhya, the city where the Ram temple is to be constructed.

The trust was set up by Prime Minister Narendra Modi’s government in February 2020 to oversee and manage the construction of the temple based on a Supreme Court verdict.

The Samajwadi Party and the Aam Aadmi Party have claimed the land deal, that took place in March of this year, involved two real estate dealers allegedly purchasing a property from an individual for $273,056 and selling it minutes later to the trust for $2.5 million.

Aam Aadmi Party MP for Uttar Pradesh Sanjay Singh during a press conference said, “the land in Ayodhya registered with number 243, 244, and 246, the value of which is $793,294, was purchased from Kusum Pathak and Harish Pathak by Sultan Ansari and Ravi Mohan Tiwari for $273,056”.

“The land deal had two witnesses — Anil Mishra, a member of the Ram Janmabhoomi Trust, and Rishikesh Upadhyay, who is the mayor of Ayodhya. It was purchased at 7:10 pm”.

“In the next five minutes, the same land was bought by Ram Janmabhoomi Trust and Champat Rai for $2.5 million from Ansari and Tiwari. $2.3 million was transferred through an online payment system”, he added.

The temple body, however, has denied the allegations.

In a statement issued late last night, the trust said: “After the Supreme Court order, a lot of people started coming to Ayodhya to purchase land, and as the UP government is also purchasing a lot of land for development works, the land price increased suddenly”.

“The land on which discussion has started is very close to the railway station and therefore, is at a very important location. All the lands purchased by the trust are at a price much lower than the market price”, the trust responsible for using donation money to build the temple, emphasised.

Demanding a probe by the country’s top investigating agencies, CBI or ED, Singh claimed that the stamp papers for the first purchase were bought at 5:11 pm and 5:22 pm for the second.

Alleging that Prime Minister Narendra Modi and Uttar Pradesh State Chief Yogi Adityanath are busy fulfilling their “vested interest”, UP Congress Party President Ajay Kumar Lallu said: “The incident has brought the reality of the BJP government in front of everyone”.

“The prime minister and the Uttar Pradesh chief minister should tell the citizens of the country how much has been collected to date and where it has been spent. There should be a CBI inquiry into the matter”, Lallu told Sputnik.

Chanting the slogan “Chanda Chor, Gaddi Chod” (“Those who have looted the donations should resign from their posts”), Lallu said that even the Vishva Hindu Parishad and others have also levelled similar allegations of fraud in the construction of the Ram temple.

Sri Ram Janmabhoomi Teerth Kshetra Trust General Secretary Champat Rai on Sunday said that by the end of March, a total of $444 million had been collected through people’s donations for the construction of the Ram temple in Ayodhya.

The construction of the temple was initiated after a Supreme Court verdict resolved a dispute related to the 2.7-acre plot of land in Ayodhya that has long been claimed by both Muslims and Hindus. In 1992, a Hindu mob razed a 15th-century mosque at the site and demanded that a Hindu temple be built on the location.