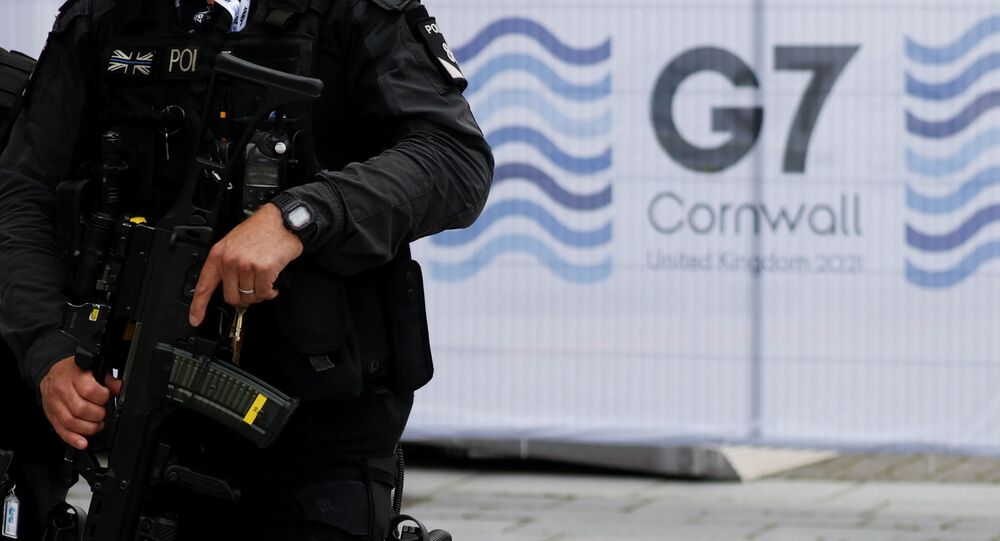 The media center for journalists covering the G7 summit, which begins on Friday in nearby Carbis Bay, Southwest England, is located in Falmouth, where the bomb threat was received. A total of over 1,000 police officers who are part of the £70 million security operation are stationed at a cruise liner berthed in the town’s dock.

The UK police have arrested a 20-year-old man from the town of Falmouth, following a bomb threat at a G7 hotel in the early hours of Thursday morning, which prompted the law enforcement authorities to order guests evacuated from the Falmouth Hotel after a member of staff discovered a suspicious package on the grounds.

According to Devon and Cornwall Police’s statement, officers were dispatched to a hotel in Falmouth at 3:15 a.m. local time after receiving a report of a suspicious package.

Guests were urged to exit the building immediately and gather in a car park at the hotel overlooking Falmouth Bay, which is about 30 minutes away from the Carbis Bay hotel where world leaders will convene this weekend.

First story of the day – hoax bomb threat at a hotel on Falmouth’s seafront.

The town is hosting the world’s media for #G7

​Devon and Cornwall Police later determined that the package was innocuous and that it had been a hoax. The cordon was removed and guests were let back into their rooms after explosive ordnance disposal (EOD) officers judged the device “not viable.”

“We currently believe that this was a hoax incident and a criminal investigation has been launched. We thank the public and those who were evacuated for their assistance,” the police said.

Furthermore, at around 9:30 am local time, the police announced that they have apprehended a 20-year-old local man in connection with the hoax device.

According to the Daily Mail, some 11,000 police officers and military staff are participating in the security measures for the summit at Carbis Bay in Cornwall. Among that number, the conference’s 5,000 police officers have been entrusted with keeping any protests away from the Carbis Hotel, which is hosting the G7 meetings.

Protesters have gathered in the area, with Falmouth being one of the officially designated meeting spots. According to the report, Extinction Rebellion and Resist G7 are among the groups intending to demonstrate.

For the first time in over two years, President Biden, who has come to the UK for his first international trip since the election, and other G7 world leaders will meet in person in Cornwall.

Welcome to the Hotel Quarantine: What We Know About UK Mandatory Self-Isolation Facilities