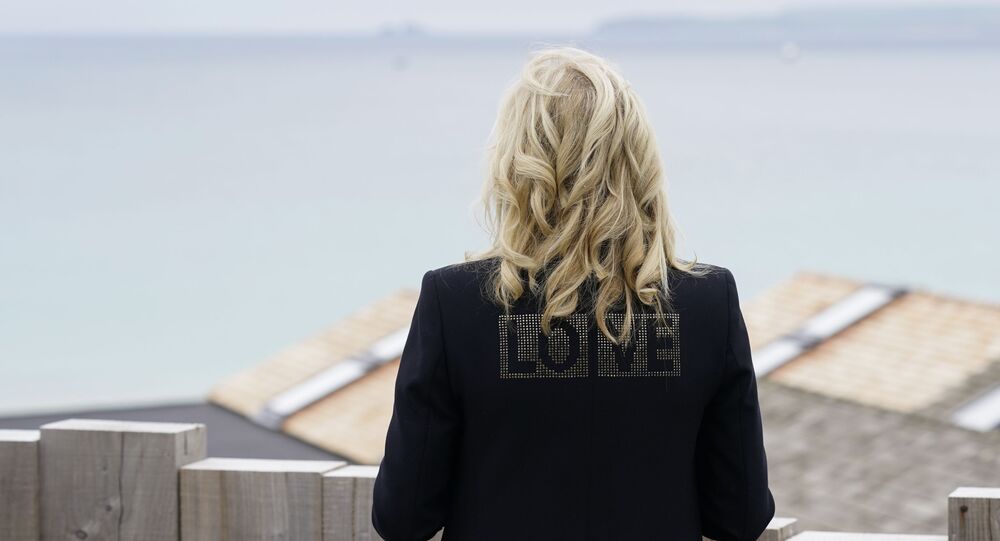 Twitter users could not help but notice a possible jab directed at the former First Lady Melania Trump, whose jacket with a controversial statement once triggered a whole wave of criticism on social media. Biden’s wife apparently decided to flatter Americans with a more genial motto.

Netizens have been buzzing over a jacket that US First Lady Jill Biden chose to wear for the meeting with UK’s Prime Minister Boris Johnson and his wife Carrie Johnson on Thursday.

The letters on the back of the jacket read “LOVE”.

Commenting on her outfit, Biden told reporters that the meaning behind the motto was “bringing love from America.”

While it may have been a representation of what the Biden administration has touted as one of its foreign policy tasks – reuniting with European allies (as the relationship had become colder during the Trump administration), many social media users suggested that it could be an attempt to draw a contrast with what Melania Trump once wore.

Netizens commented that the First Lady could have intended to show the difference between the messaging of her husband’s administration and that of US President Donald Trump, in an apparent attempt to appear more caring, or even “troll” her predecessor, as some suggested.

Clap back at Melania?

The difference in beauty between Jill Biden and Melania Trump is that Melania only cared about her damn self.

Jill Biden wears jacket with word “LOVE” on back as the Bidens + Johnsons meet – immediately invoking comparisons with Melania Trump’s controversial jacket with the words “I really don’t care” in 2018 #G7 pic.twitter.com/UurTDS6NN9

Not all netizens, however, showed support for the first lady, expressing skepticism over her message.

Wow the border crisis is over! Such a powerful jacket 😂😂

Mocking is not “Love”.

She should wear a jacket with Hunters screenshots on the back.

Back in 2018, Melania Trump triggered a whole wave of controversy on social media when she wore a jacket that read “I really don’t care, do you?,” to a migrant detention center. The choice of outfit for the event led many users to think the former first lady showed blatant ignorance of the situation, while others suggested it was most likely a random choice of outfit, without any hidden message.