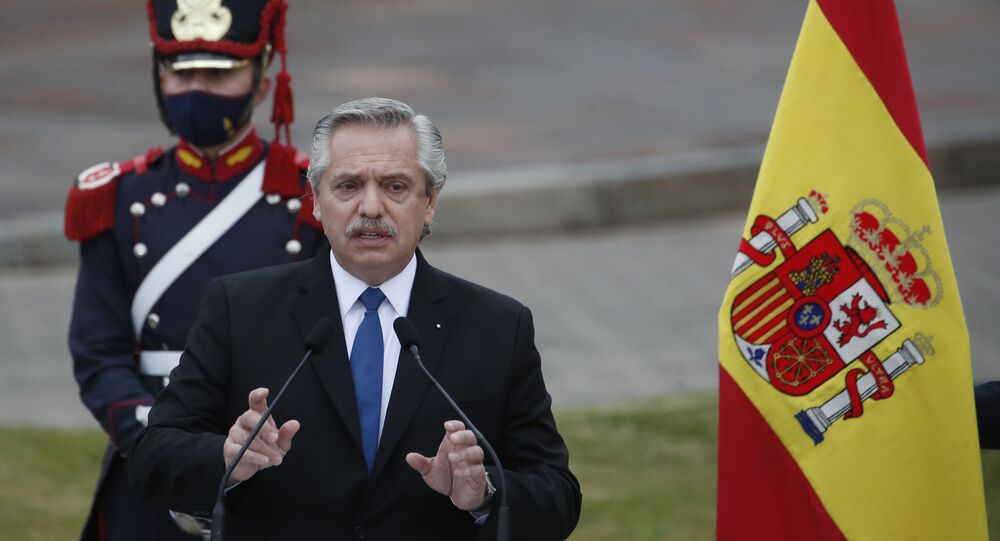 Argentinian President Alberto Fernandez, who is proud of his country’s ties with Europe, sparked outrage with his comments about people from the two most populous Latin American nations.

Both Brazil’s President Jair Bolsonaro and his son Eduardo had a response to Argentina’s President Alberto Fernandez, who triggered a storm of allegations of racism after telling visiting Spanish Prime Minister Pedro Sanchez that “Brazilians came from the jungle”.

This is our racist president of Argentina.
You won’t get something worse.

“Mexicans descend from Indians, Brazilians from the jungle and Argentines from ships” https://t.co/gS1NnGXKU2

The president’s words were actually a quote from a 1982 song by Argentinian singer Litto Nebbia, who Fernandez is a fan of, many rushed to point out.  But the comment nevertheless caused an uproar on social media, swiftly prompting Fernandez to apologise:

“I did not mean to offend anyone, in any case, whoever has felt offended… I give my apologies,” the president wrote on Twitter, noting that his country is “proud of our diversity” and that over five million immigrants arrived in Argentina in the first half of the 20th century.

According to congressman Eduardo Bolsonaro, son of Brazil’s president, the comments were really “racist”. He moved on to target the country’s troubled economy, noting in Twitter: “I say the ship that is sinking is that of Argentina.”

2019: “Bolsonaro is racist but Argentina will have a good relationship with Brazil.”

2021: “Brazilians came from the jungle. Argentinians arrived by ship.” pic.twitter.com/M7xTWrDidI

His father President Bolsonaro, who has never been a fan of “leftist bandit” Fernandez, as he gently dubbed him, posted a photo in response. In the image, Bolsonaro was pictured alongside a group of indigenous people while wearing native head-dresses.

“Jungle!”, was his single-worded caption to the photo alongside Brazilian flag.