On Friday, the Saudi-led coalition said it intercepted and destroyed an explosive-laden drone launched by the Yemen-based Houthis towards the city of Khamis Mushait.

The Saudi-led coalition has announced that it foiled an “imminent” Houthi attack in the Red Sea, just a day after it intercepted an explosive-laden drone fired in the direction of a Saudi city, Khamis Mushait.

According to the coalition, the Yemeni militia intended to use two explosive-laden boats in the Red Sea. They were destroyed off the port of Salif.

Earlier this week, the coalition reportedly said it had established a presence on a strategic island at the entrance to the Red Sea to counter perceived threats to maritime trade from the Houthis.

“All equipment currently present on Mayun Island is under the control of the Coalition Command, and is situated there to… counter the Houthi militia, secure maritime navigation and support West Coast forces”, said a statement on Saudi state news agency SPA, citing an unnamed official in the coalition.

The statement was made in response to an Associated Press report citing Yemeni officials claiming the United Arab Emirates (UAE) was behind an air base that has emerged on Perim Island, also known as Mayun, in the strategically important Bab al-Mandab strait. 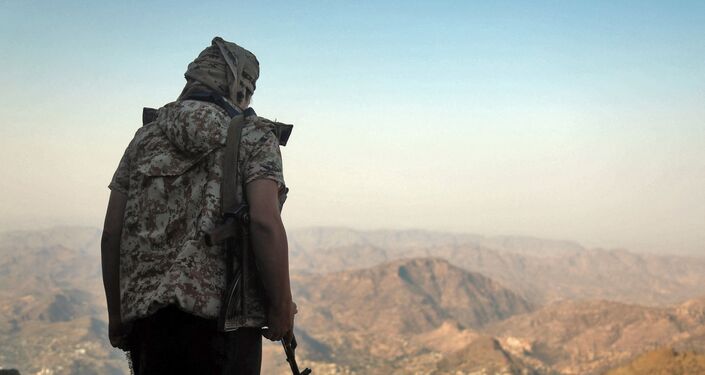 The unnamed official dismissed as “baseless” reports that Emirati forces were present on the Perim and Socotra islands. According to the insider, current UAE efforts were centered around providing air support for coalition operations in Marib, which the Houthi forces are trying to seize.

The Red Sea incident comes just days after the Houthis threatened “unexpected” attacks against “aggressor countries”. The warning was made shortly after the US imposed sanctions on two Houthi military leaders involved in the militia’s ongoing offensive in Yemen’s Marib Province.

“Sanctions do not scare the mujahideen. If they continue the blockade and aggression, then perhaps there will be strikes on unexpected sites in some aggressor countries”, Mohammed Ali al-Houthi, head of the Houthi supreme revolutionary committee, said last week.

In 2020, the Houthis launched an offensive on the province of Marib, an oil-rich part of Yemen, and the last government stronghold in the north of the country.

Houthi drone and missile attacks have intensified over the past few months, with the Yemeni militia targeting military infrastructure and bases, airports, oil infrastructure, missile defences, and cities in Saudi Arabia.

The Saudi-led coalition of Arab states has been involved in the Yemeni civil war since 2015 in a bid to restore the ousted government of President Abdrabbuh Mansur Hadi, who fled to Riyadh after a Houthi-led popular uprising in Sanaa in late 2014.

Second US Base Near Syrian Oil Field Comes Under Attack, Local Media Say