The global stock markets, including the US tech sector, have been experiencing pressure on the prices of shares amid fears that inflation might get out of hand as a result of governments and central banks actively stimulating their economies to help them overcome the effects of the coronavirus pandemic.

The rally of the price of gold, which started on 1 April, is not going to stop and is likely to reach the level of $2,200, but not for reasons most people think the precious metal is spiking, Lee Munson, the Chief Information Officer and president at the Portfolio Wealth Advisors, said in a comment for Kitco News. While it is true that gold became the last of the stock market’s assets to react to fears of increasing inflation, it is wrong to predict the future of the trend based solely on inflation expectations, the analyst believes.

According to him, there has been a “regime change” in the gold market due to The US Treasury and the US Federal Reserve’s being primarily concerned not with inflation, but potential deflation. Munson believes that the Fed will actually be content with inflation climbing to “2%, 2.5%, 3% for more than a month”. The Portfolio Wealth Advisors’ CIO said that many investors expect the Fed to overreact to such inflation levels, but he rejects such a scenario. Instead, he believes the government will continue its current money-printing practices.

“Inflation is definitely a risk, but people are overreacting to the magnitude of the actual price pressures. I think many people are thinking of the late 70s, early 80s type of inflation — when gold peaked. I don’t think that’s the magnitude we’ll get”, the analyst said.

Munson explained that due to the concerns of a possible recession amid the economic recovery after the 2020 lockdowns, the Federal Reserve is “forced” to keep the interest rates low. Otherwise, the hike in rates will hit corporate and household debts. This practically means that the US authorities will not be taking regulatory action for some time, possibly allowing the precious metal to reach new heights.

As the Portfolio Wealth Advisors’ CIO explained, money printing itself does not always result in inflation, meaning that the Fed can allow the practice to go on for a long period of time without the need to respond to hyperinflation and changing the rates.

“One of the biggest problems people have with gold is walking around saying it’s an inflation hedge. But that’s not necessarily true. […] When you have countries outside the US that have hyperinflation, and the money gets debased, gold is a store value. It has been that way for thousands of years. That’s why people buy it because they’re worried about their currency being debased”, Munson said. 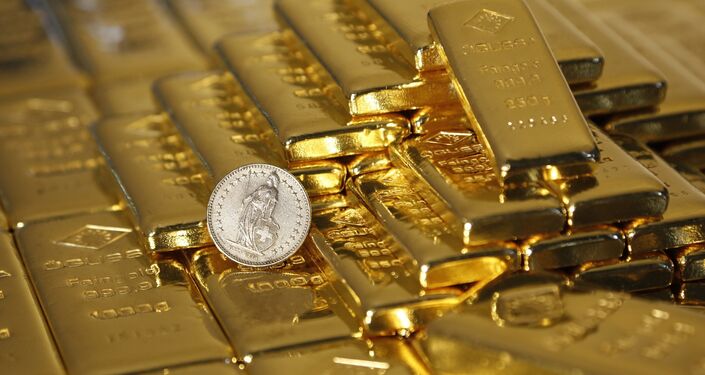 The financial analyst added that the US money printing period is likely to continue up to the first half of 2023. He concluded that it’s not worth buying gold if you simply believe there will be inflation and an economic crisis ahead. In Munson’s opinion, one should only do it if “the central banks are going to print money like there’s no tomorrow”.

Tory Peer Warns Not to Sell Food Production ‘Down the River’ as UK, US at Impasse Over Trade Deal