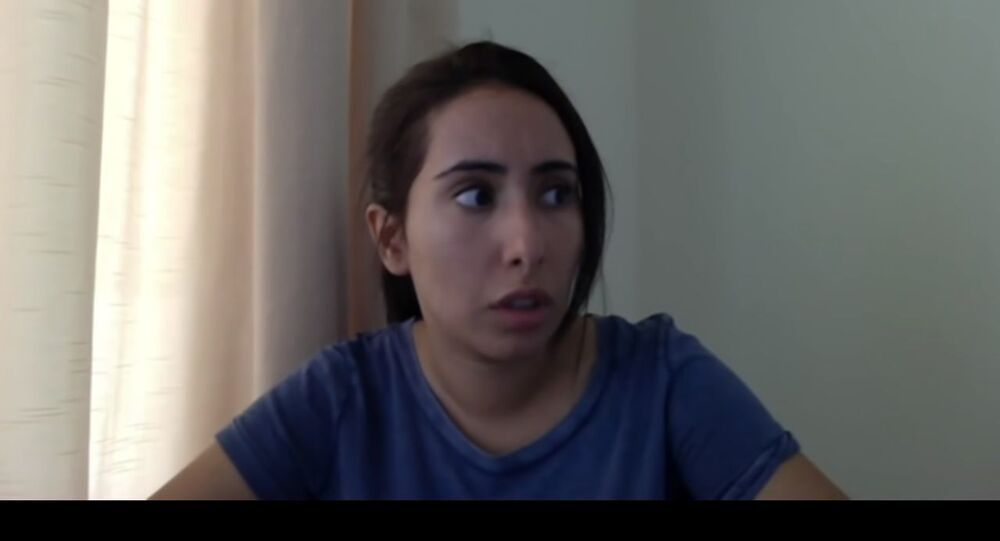 Emirati Shikha Latifa, one of numerous daughters of UAE Prime Minister Sheikh Mohammed bin Rashid Al Maktoum, has been off the radar for many months after an unsuccessful escape attempt from Dubai in February 2018. Earlier this year, British media outlets shared clips which showed Latifa claiming she was being held hostage in a home prison.

Two photos purporting to show missing Princess Latifa, a daughter of Dubai ruler Sheikh Mohammed bin Rashid Al Maktoum, emerged on social media this week, prompting speculations about “staged” shots after the woman has not been seen or heard of for months.

One pic, published through the public account of the user “shinnybryn”, shows a woman highly resembling the 35-year-old princess sitting next to two other ladies in the Mall of the Emirates in Dubai, with a cinema advert for the Demon Slayer running in the background. The movie was released in the United Arab Emirates on 13 May 2021.

Another photo, shared through the same account and captioned “Lovely food at Bice Mare with Latifa earlier”, apparently shows the princess next to the same woman, the user of the Instagram page. The images have not been verified, but one of the friends of the princess confirmed to the BBC that it’s Latifa who has been pictured on the first pic released Thursday.

The United Nations, which has remained worried about the woman’s fate while calling on the United Arab Emirates to provide evidence that the princess was alive, told BBC that is still awaits “convincing proof of life” in the case of Latifa.

Meanwhile, co-founder of the Free Latifa campaign group, David Haigh, said that “there have been several potentially significant and positive developments in the campaign” but declined to comment further.

Social media users, however, remained uncertain about the circumstances surrounding the photos if they are proved to be genuine – some have suggested in a comment section under the pics that the images could have been simply doctored. According to several Instagram users, Latifa did not look particularly relaxed or happy while posing for photos after months of “confinement”, as she had earlier claimed in a viral clip.

“I am not sure I believe this picture to be true. Latifa has been missing for ages and then this little ‘out for dinner’ pic was uploaded! Something just does not add up,” one person commented.

“I know that I could be completely wrong here, but I have a feeling that this is staged,” another person added. “Latifa wasn’t seen or heard from for such a long time, but you happen to just casually post two pictures with short captions of you enjoying this and that with her…”

In the clip, Latifa shared details behind her previous unsuccessful escape attempt at the age of 16 and how she was “tortured” in the aftermath, while also making “murder” accusations against her father. The princess said that she was planning another attempt to run away from Dubai in February 2018, warning that her farewell video would be publicly released in case her life was in danger.

It was widely reported then that the woman crossed the border to Oman on 24 February 2018 alongside a friend but was forcibly returned to Dubai after being intercepted in a yacht approaching Goa.

Since then, little details about the sheikha’s whereabouts or conditions have been available to the public. Several pictures showing Latifa alive while meeting Mary Robinson, a former United Nations High Commissioner for Human Rights, were released by the United Arab Emirates’ Ministry of Foreign Affairs in December 2018.

Head of Beirut Port Claims No Explosives Were Stored Near Substances That Blew Up, Reports Say

Israel Behind ‘Dozens’ of Attacks on Iranian Ships Which Have Cost Tehran ‘Billions,’ Report Claims