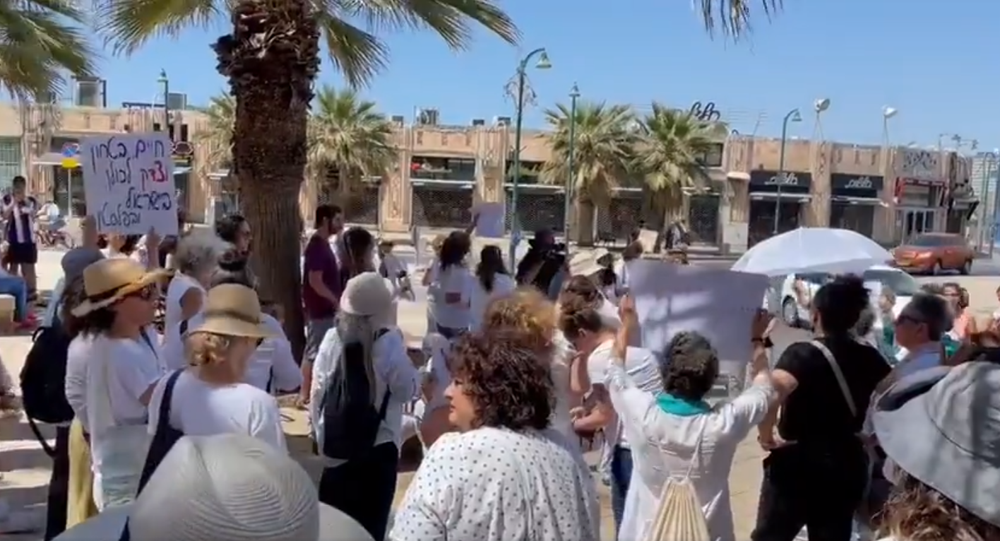 Cities across Israel have been consumed by violent altercations after weeks of protests by Arab Israelis over Jerusalem authorities’ move to restrict access to a key Muslim holy site. The situation was exacerbated further by back-and-forth rocket and missile strikes by militants in Gaza and Israeli warplanes that have left over 150 people dead.

Israeli Jews and Arabs staged joint rallies across multiple cities in Israel on Friday demanding an end to the recent spate of inter-ethnic violence between their communities.

One of the rallies, dubbed ‘Jews and Arabs – Refusing to Be Enemies’, took place in a square in Eilat, southern Israel, with protesters carrying signs reading “Stop,” “We are Hope” and “Love Thy Neighbour as Thyself.”

Another event took place in Jaffa outside Tel Aviv, with dozens of people, mostly women, gathering near the town’s clock tower with anti-war signs and chanting “No More War” in English, Hebrew and Arabic.

No more war!
Jews and Arabs refuse to be enemies!
Pro-peace and coexistence protest in Jaffa. pic.twitter.com/6moJRItOpo

Arabs and Jews from neighbouring Arab and Jewish communities protesting for peace and coexistence in Emek Hefer with signs saying “love thy neighbor as thyself”. pic.twitter.com/fhY16yq4ox

Jewish and Arab health professionals unite in solidarity: Medical staff at hospitals in Israel call for peaceful coexistence and cooperation between Jews and Arabs against the backdrop of growing conflict. https://t.co/6CRzLhm1LJ ISRAELITY pic.twitter.com/R1Z3yEJLO1

Hundreds of Jews and Arabs gathered in protests in Jerusalem and its neighboring towns against the violence, the occupation, and to call for an immediate ceasefire. pic.twitter.com/8qqd0GsjMI

Yesterday, near Jerusalem, Arab and Jew residents of the neiboring villages demonstrate against the violence that sweeps Israel. We have lived together and will continue to respect each other. Let’s keep the sanity! pic.twitter.com/f6BxflLrbV

The peace demonstrations come after days of escalating violence this week between Jewish and Arab-Israeli communities, with rock attacks, fire bombings, shootings, arson and street altercations reported in cities across the country from Monday onward. The tensions have been exacerbated by Gaza militants’ launch of hundreds of rockets into Israel, and the Israeli military’s campaign of air and missile strikes into the besieged territory.

This week’s violence came after nearly a month of escalating tensions in Jerusalem over Israeli authorities’ 12 April decision to put up barriers around Al-Aqsa Mosque – one of the holiest sites of Islam, ahead of the Ramadan holiday, while leaving access to Jewish holy sites unobstructed. The decision caused weeks of street protests, with tensions ramped up further ahead of the Israeli Supreme Court’s expected ruling to evict Palestinian families from their homes in an east Jerusalem neighbourhood and be replaced by Jews.

Vienna Talks: Why Raisi’s Win May Give Tehran Upper Hand in Negotiations Over Iran Nuclear Deal

Tragedy for Some, Victory for Others: Has Israel’s Pull-Out Improved Life in Gaza?

‘Civil War Has Erupted’: Netanyahu Declares State of Emergency in City of Lod Amid Violent Riots