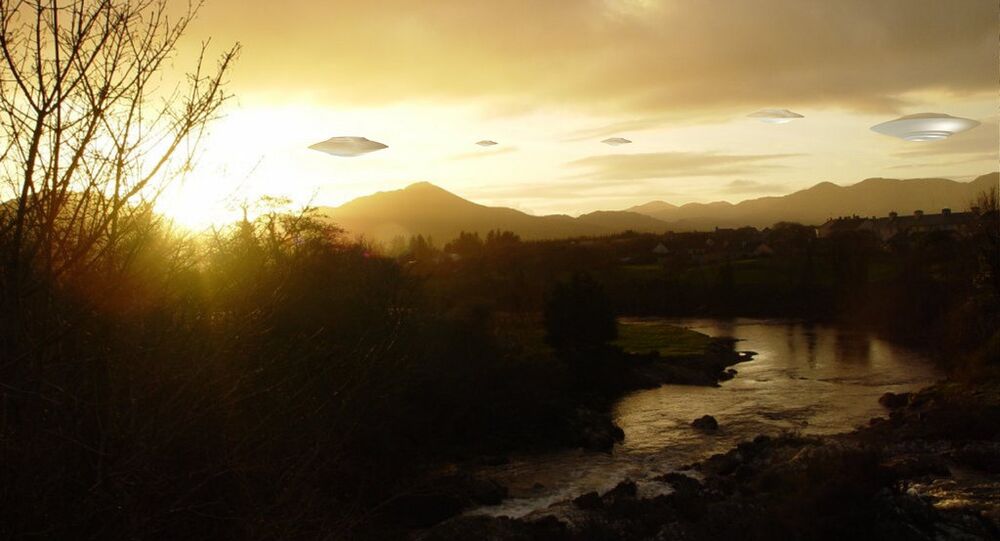 Previously, materials reportedly from a briefing prepared by the Unidentified Aerial Phenomena Task Force (UAPTF) and cited by Mystery Wire showed several US Navy destroyers off the southern California coast had encountered unknown ‘aerial intruders’, with ship logs ostensibly confirming the ‘objects’ had been seen by crews aboard multiple vessels.

The footage that captures what has been described as a spherical transmedium vehicle (able to travel through both air and water) moving, hovering, and vanishing into the Pacific Ocean was shared by Corbell on Friday with Mystery Wire.

The image of the six-foot (2 metre) in diameter sphere, said to have travelled alongside the USS Omaha for about an hour, was obtained with a FLIR camera that can sense and show heat signatures.

The video was reportedly filmed inside the Omaha’s command centre just before 11 p.m. on 15 July 2019 as it sailed off the coast of San Diego, with two unidentified crew members heard saying, “Wow, it splashed,” once the object had performed what seemed to be a controlled descent into the ocean.

People thought we got 1 video, but we also got three frames of second one.

Based on the USS Omaha Sphere USO slide @JeremyCorbell shared, I threw together the available frames for an animation of it dropping into the water. #USSOmaha #Sphere #USO #UAP #UFO #EndUAPsecrecy pic.twitter.com/n73qBrHmoO

​According to audio in the footage, the Omaha launched an immediate search, but once the sphere had dropped from the screen, it also vanished from the Omaha’s radar and sonar.

Subsequently, the team was unable to find any wreckage on the surface.

This footage is unclassified. Still images of this footage were included in the May 1st, 2020 UAPTF intelligence briefing that I have previously reported on.

​The video is believed to date to the same incident that Mystery Wire reported in April, when two freeze frame images from the footage were made public.

Tomorrow at 10am PST – I will be releasing some pertinent details regarding the USS Omaha UAP/UFO event series. First on my Instagram, second here on Twitter. This will help us to begin and expand the dialogue a bit.@G_Knapp + @Chieftog + @MysteryWire#UFOtransparency pic.twitter.com/k4CP0cukVo

​At the time, a Pentagon spokesperson was cited as confirming that one of the images was recorded by US Navy personnel.

The documents are reportedly part of the Unidentified Aerial Phenomena Task Force (UAPTF) briefing ahead of a comprehensive report for US Congress, due in June.

It is said to have amassed photographs and videos of so-called “UFO encounters” with US military assets, including Navy destroyers off the southern California coast.

During July 2019, several American warships based in San Diego allegedly repeatedly encountered unknown aerial “intruders”. Thus, in one video of that time, Naval officers using a night vision device reportedly captured footage of what appeared to be pyramid shaped objects hovering 700 feet above a destroyer.

“This (video) was taken on deployment from the USS Russell. It shows what they described as vehicles… They made sure in this classified briefing, they made a great distinction that this is not something that we own either a black project, this is not something of a foreign military, that these were behaving in ways that we did not expect. And that they were you know shaped non aerodynamically. Like pyramids, these are flying pyramids!” Corbell was cited as saying.

Critics, however, suggest the objects might be drones or balloons.

Nevertheless, the US government is set to release a report in June on “UFO sightings” after unclassified videos of the phenomena were leaked to The New York Times in 2017.

Care to cover this? @ladbible pic.twitter.com/moQhggOqge

​A detailed analysis was recommended by Sen. Marco Rubio after he viewed classified briefings on Unidentified Ariel Phenomena (UAP) while heading the Senate Intelligence Committee.