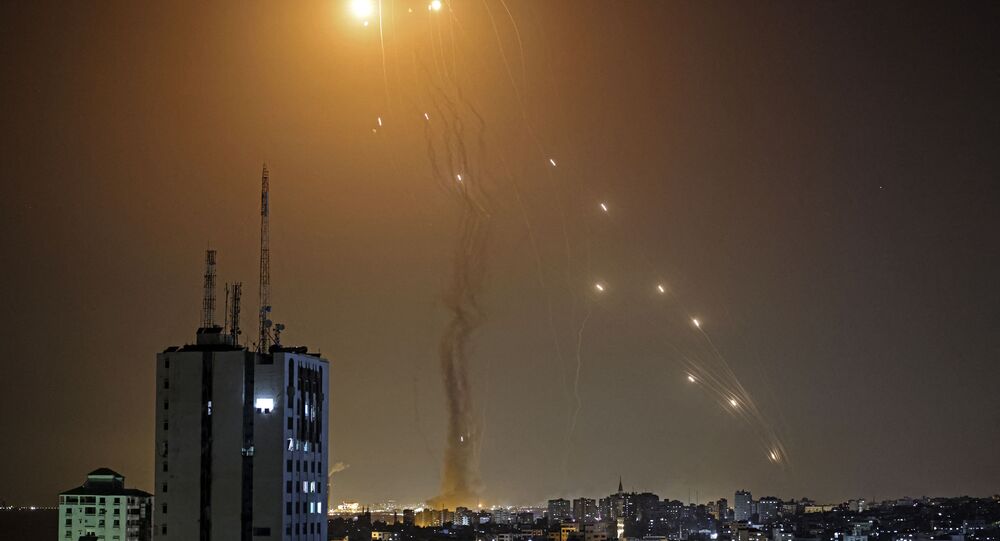 Since 10 May, which witnessed the start of the largest confrontation in recent years at the Gaza Strip border, Palestinian militants have launched about 2,000 rockets toward Israel, prompting the Israeli army to retaliate with multiple strikes against the Hamas movement.

The Israel Defense Forces (IDF) have complained that Twitter refused to allow it to publish a notification about alarm sirens sounding in the city of Beersheba, as it had already made such a post several hours earlier.

The IDF acknowledged in a subsequent post that “we are repeating ourselves”, but emphasised that this was a “reality for Israelis across the country”.

​This comes as Israeli planes renewed air strikes on Gaza early on Saturday, while Hamas militants responded by firing rockets into Israel amid a fifth night of violence. More than 2,000 rockets were launched at Israel from Gaza over the past night, with half of them intercepted, said the IDF.

In response to the 2,000+ rockets fired from Gaza toward Israel, tonight we struck:

Hamas is paying the price for its terror.

Sirens sounded across much of southern Israel, while buildings in the cities of Beersheba and Ashdod were struck by rockets. There were no immediate reports of injuries.

Since the situation on the border between Israel and the Palestinian Gaza Strip escalated on Monday evening, around 1,750 rockets have been fired from the Gaza Strip into Israeli territory.

Barrages of rockets are being fired non-stop from Gaza into southern Israel.

Tonight, a rocket hit the city of Ashdod—see the damage for yourself.

On Friday, the Izz ad-Din al-Qassam Brigades, the military wing of the Gaza Strip-based Hamas movement, claimed it had fired rockets at the Israeli airbase of Hatzerim, located near the city of Be’er Sheva.

“Al-Qassam Brigades have fired a batch of rockets at the Hatzerim airbase,” stated the Hamas military wing.

Ahead of the fresh spiral of violence, tensions in the disputed city of Jerusalem had been brewing for weeks since the start of the Islamic month of Ramadan and the Israeli decision to restrict access to the Temple Mount, a holy site for Jews and Muslims that is home to the Al-Aqsa Mosque.

Mobs of young Arab men initiated dozens of attacks on Jewish civilians, with the situation escalating on Sunday, when Israel celebrated the 54th anniversary of the unification of Jerusalem, following the capture of the east of the city during the Six-Day War in 1967.

Riots were also triggered at the start of the week in the Sheikh Jarrah area of East Jerusalem after an Israeli court ordered that several Palestinian families should be evicted from the neighbourhood. Before 1948 the property had been owned by a Jewish religious association, and in line with a 1970 Israeli law, Israelis may reclaim property in East Jerusalem owned from before it fell into Jordanian hands.

There is no similar law for Palestinians, while specifying that they may remain as protected tenants. Protesters had gathered nightly in Sheikh Jarrah over the past week, clashing with riot police.

Since Monday, at least 132 people have been killed in Gaza and 950 others wounded, according to Palestinian medical officials.

Since 10 May, PalestineRCS has provided first aid services to 616 injured and evacuated 141 persons in the Gaza Strip. pic.twitter.com/2wTeSWUTeA

Free access for #PalestineRCS medical teams is a must to ensure their provision of necessary medical assistance to injured people in #Jerusalem@ICRC_ilot @ifrc pic.twitter.com/Srb5TqcJOv

The UN Security Council will convene to discuss the worst hostilities in the region in years on Sunday, according to diplomats.