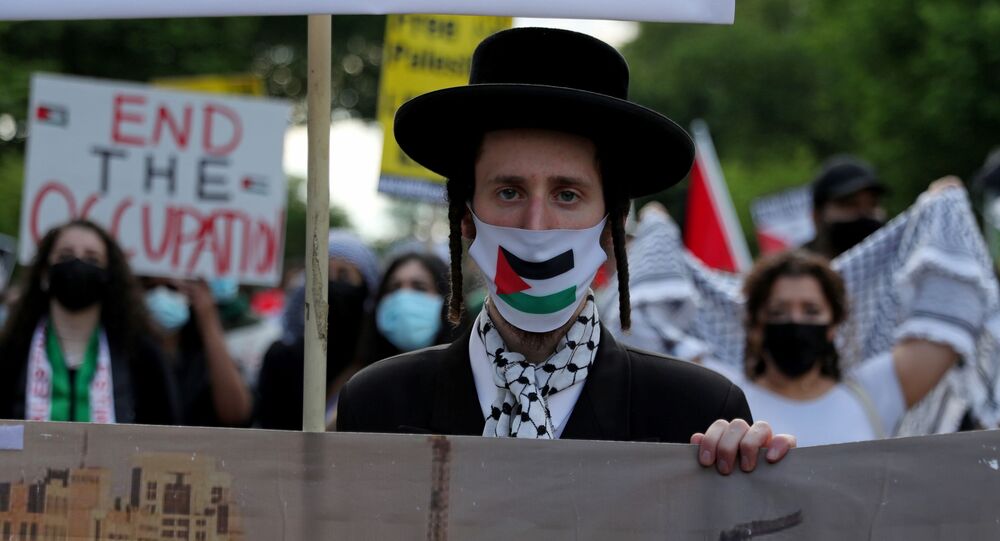 WASHINGTON (Sputnik) – Hundreds marched in downtown Washington, DC, from the US State Department to the White House in protest against Israel’s occupation of the Palestinian territories, its military action in Gaza and police operations in East Jerusalem.

Ethnic Palestinians were joined by American left-wing activists brandishing Black Lives Matter paraphernalia and religious Jews from the Neturei Karta group known for their opposition to Zionism and the very existence of Israel.

“We came as a group of Jews to show our support, our solidarity with the suffering of the Palestinian people… What’s happening in [disputed Jerusalem neighborhoods of] Sheikh Jarrah, Silwan, what’s happening in Gaza, in the entire occupation is not only unacceptable as a crime, it’s against God, it’s a rebellion against God, against the Torah,” Neturei Karta leader Rabbi Yisroel Dovid Weiss told Sputnik.

Protest supporting Palestine near the White House this evening, featuring a gigantic Palestinian flag and a wooden peace tank adorned with flowers paraded from the State Department, where hundreds started marching a couple of hours ago. pic.twitter.com/tOmVzj3dqw

At least 35 Palestinians in Gaza and three Israelis were killed, while many more were wounded in an exchange of hundreds of rocket salvos and airstrikes. The fiercest flare-up since 2014 followed days of clashes in East Jerusalem where local Palestinians rose up against Israeli plans to evict several families from homes in Sheikh Jarrah.

“We are here to say to the State Department which refuses to acknowledge the violence of the Israelis… No more! No more funding, no more political support,” one of the speakers at the rally, a young Palestinian woman, said.

Clearer view of the mock tank at H and 16th. Curiously, the other side reads “invest in peace, SOS Colombia”—turns out it was repurposed from a recent round of sit-ins at the Colombian embassy over the ongoing crackdown there. pic.twitter.com/k7mcmL66vx

The US administration has called for de-escalation and pledges to work with both sides as well as other major stakeholders. It has condemned the rocket attacks on Israeli cities and supports Israel’s right to defend itself, but also urges its chief regional ally to refrain from destabilizing unilateral actions, including evictions, house demolitions and settlement activities.

Pompeo Says UN Sanctions on Iran Have Been Restored