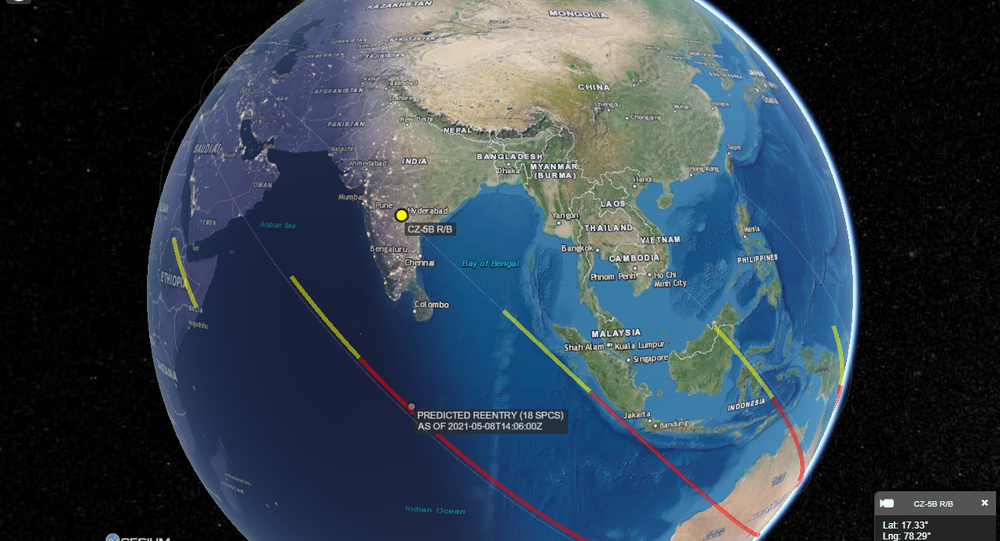 A Chinese CZ-5B rocket is in the spotlight of global attention as it tumbles through the atmosphere approaching Earth, with its final destination yet unknown, keeping scientists and skywatchers around the world guessing.

Scientific agencies around the world continue to try and predict where the debris from the Chinese CZ-5B rocket will eventually land, providing maps with possible trajectories.

According to earlier calculations by Russia’s Roscosmos, the rocket could enter Earth’s atmosphere as soon as 9 May, somewhere in the Pacific Ocean.

CelesTrack released a map, also available in a 3D-version, showing several possible paths for debris to fall and also a tracker of the CZ-5B. Corridors pictured on the map also show decaying altitude, starting at yellow below 150 km and then red below 146 km.

CelesTrak just added a fully interactive view of the Long March-5B reentry with corridors that more accurately reflect how this event evolves and where reentry can reasonably be expected to be seen (based on @18SPCS data): https://t.co/Gdwbvsms0Y. pic.twitter.com/fH21mgjnpu

Space-Track.org estimated that the rocket body’s re-entry will occur at around 2:00 GMT on 9 May, somewhere above the Mediterranean sea.

Very similar to last prediction, but with center of reentry window further west.

90% of this track is over ocean. pic.twitter.com/ZZYgq9gDU5

​The body of the rapidly tumbling Chinese rocket, weighing some 20 tons, is hurtling in the atmosphere at some 27,000 kilometres per hour (~17,000 miles per hour). The launch rocket earlier delivered part of a Chinese orbital station Tiangong (“Heavenly Palace”) into near-Earth orbit.

Will This Study Help the World to Prevent Gonorrhoea Doomsday?