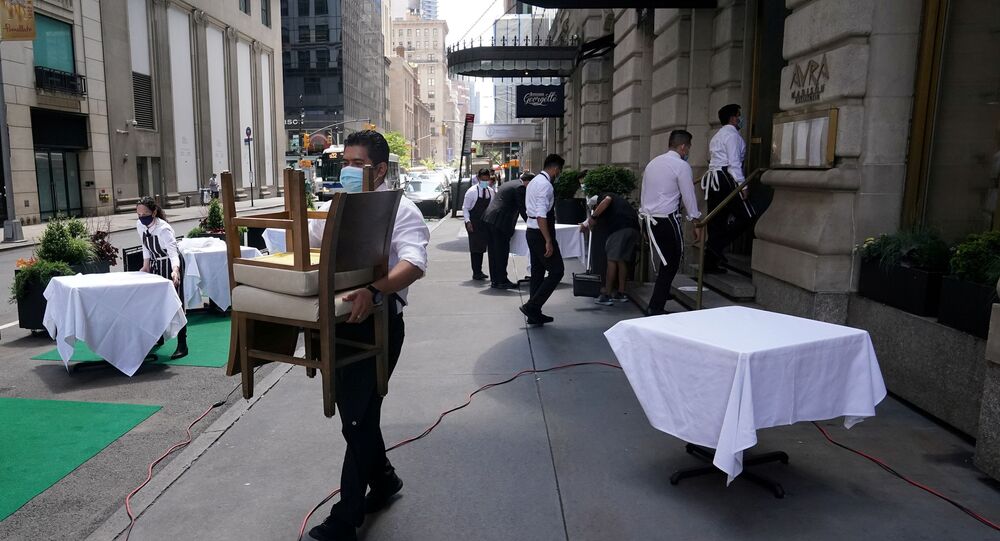 When US President Joe Biden signed the $1.9 trillion American Rescue Plan Act in March, it offered a $1,400 stimulus check to Americans who earn less than $75,000 a year. The package also granted an extra $300 in weekly unemployment benefits through September 6.

New York City restaurants have recently been experiencing a devastating shortage of employees, as many find the relief efforts of unemployment checks more favorable than their usual low-waged wait staff positions offer.

The increase in unemployment has for months placed the Biden administration in hot water after Republicans blasted the commander-in chief’s policies for disincentivizing workers and prompting the labor shortage.

Biden responded to the backlash on Friday, and explained that it would take time before the economy reaped the benefits of his policies. However, he also predicted that job gains would accelerate in the coming months.

Shedding light on the development, Philippe Massoud, CEO of Ilili, a Lebanese restaurant on 5th Avenue, told the New York Post that he won’t be able to open his restaurant to the 75% indoor capacity set by Governor Andrew Cuomo last week due to the staff shortage.

“The government unintentionally shot itself in the foot,” Massoud told the Post, remarking that “the stimulus plan is being completely undermined by the unemployment program.”

Restaurants and economists have reported that wait staff who earn lower wages can make more money if they stayed home and simply collected unemployment checks.

“It seems as though they are perfectly content living off of unemployment,” Polina Jourbina, a 31-year-old manager at Mermaid Inn, a seafood restaurant in NYC, told the Post. “It’s maybe still a slight fear of COVID. Maybe still people are unsure. I know [for] some people just going back to the idea of living a normal life post-COVID is a little weird.”

Jourbina admitted that half or fewer of her employees came back to work after the COVID-19 shutdown hit New York, which appears to be the issue for many small business owners. Some employers have mentioned that even hiring agencies are having a hard time filling the employee pool.

Citing the latest jobs report, the US Chamber of Commerce tweeted on Friday that the added unemployment benefits granted by Biden are the root cause in the “dampening” job market.

Latest government figures showed that the unemployment rate rose by over 6%, with payrolls increasing by just 266,000, effectively becoming a massive letdown as earlier estimates indicated the US would see an increase of over a million new jobs.

Reports in April showed that the increase in unemployment insurance rates backfired as it subsequently imposed financial burdens on already-struggling restaurants. The New York State Restaurant Association wrote a letter on April 19 to Cuomo and others asking officials to rectify the issue of workers not returning.