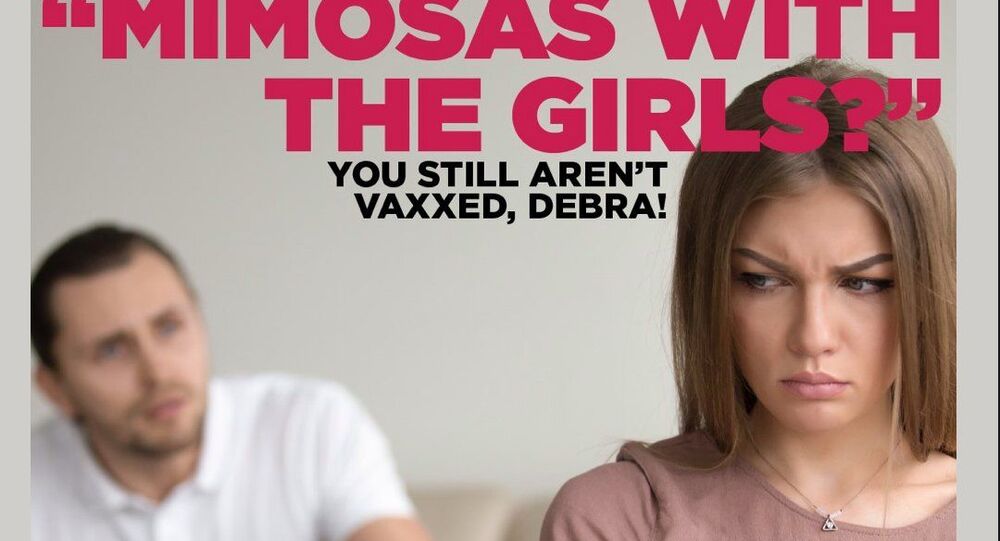 You’d be forgiven for mistaking the City of Baltimore’s new coronavirus vaccine and lockdown propaganda for a public information campaign about domestic violence and controlling partners, but apparently Debra’s boyfriend is only telling her not to see her friends out of concern for the pandemic risk.

Twitter users are LOLing at a cringeworthy new piece of COVID-19 ‘public information’ from the City of Baltimore.

The message circulating on social media shows a man pointing out to his deeply irresponsible girlfriend that she can’t possibly socialise because “You still aren’t vaxxed, Debra!”

In what strikingly resembles a poster for a women’s refuge, poor ‘Debra’ looks resentful and petulant at her lecturing boyfriend’s insistence that she can’t go out for mimosas — kind of like a Buck’s Fizz but with less champagne — with her girl friends over the May 1 weekend.

​Others found the pious, lecturing tone of the ad hilarious.

​One response was bizarrely high-brow.

‘Mimosas with the girls You? You still aren’t vaxxed, Debra!’ I imagine Thomas Szasz and Michel Foucault looking down from heaven and darkly chuckling. HT @robbysoave. Cc @wesyang pic.twitter.com/d2ZcOUyNjr

Could the Internet Be Any Crazier? Millions of Fans Call Friends Reunion on 27 May Best News of 2021