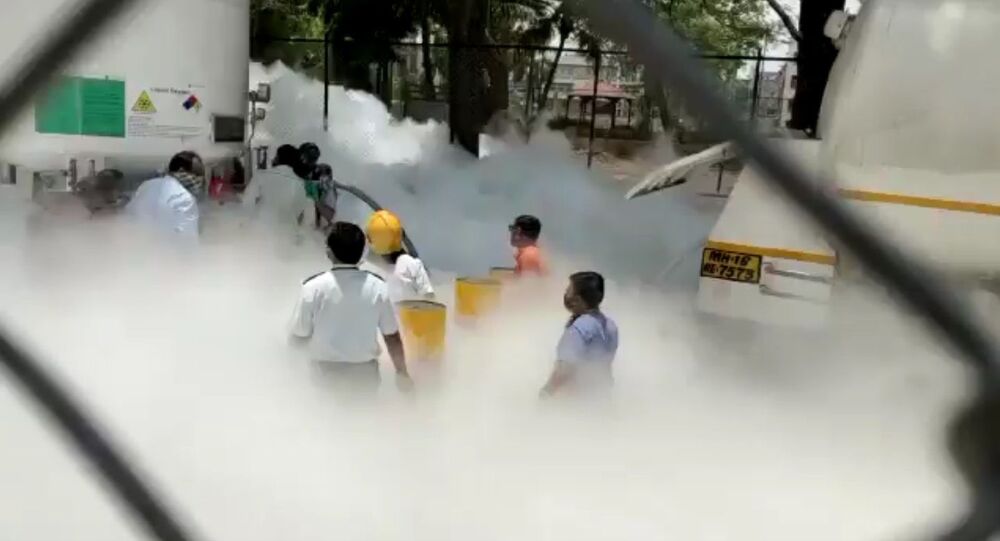 India registered 2,023 deaths and 295,041 new COVID cases on Wednesday. Amid this surge in cases, a shortage of oxygen cylinders is troubling hospitals in several cities. To meet growing demand, the central and state governments are rushing oxygen supplies around the country.

Several people have died after a bad leak from an oxygen vessel at a hospital in Nashik, the largest city in India’s northern Maharashtra state on Wednesday just when hospital staff were re-filling empty cylinders from the facility.

At the time of writing, there are conflicting reports on exactly how many died: Rajendra Bhaskarrao Shingne, Maharashtra’s Food and Drugs minister, has confirmed 11 deaths, according to Indian news agency ANI but Suraj Mandhare – Nashik’s district magistrate and collector – said the incident caused 22 hospitalised COVID patients to die.

​The accident caused havoc at the Zakir Hussain Hospital. A thick cloud of white gas enveloped the hospital’s parking lot, as can be seen in the videos taken at the site and appearing on Twitter.

#Oxygen tank gets leaked at Dr Zakir Hussain NMC Hospital in #Nashik. 171 #COVID19 patients are on oxygen and 67 are on ventilator. pic.twitter.com/ZVnbEZSd1g

​The fire brigade rushed to the hospital to contain any further damage.

Efforts were still being made to contain the leak late in the afternoon, hence details are sketchy about the cause and amount of oxygen leak remains unclear as of now.

Beijing on App Ban: If Tagore Poems, Yoga Are No Threat to China, Why Would PUBG be a Risk to India?