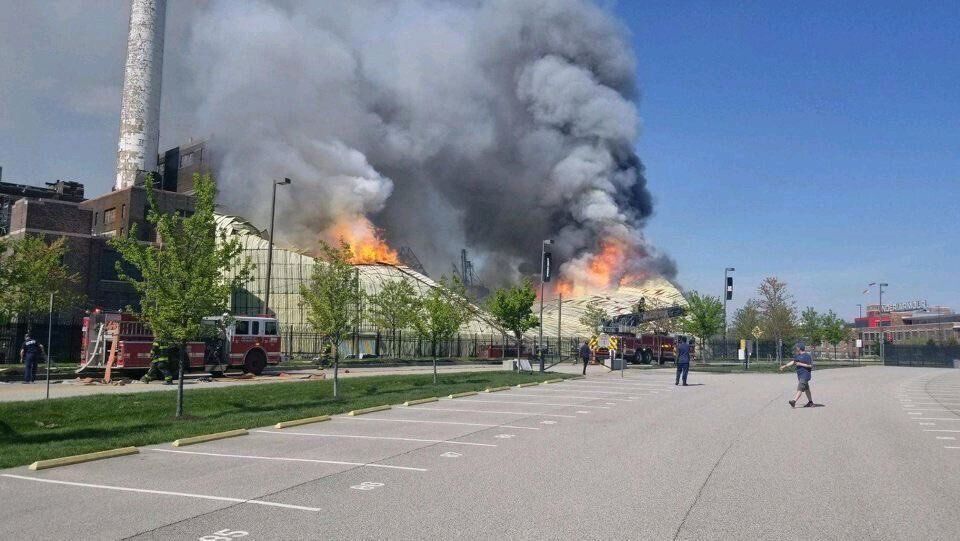 The 99-year-old facility has been a distinctive site on the Baltimore inner harbor waterfront for decades with its recognizable neon rooftop “Domino Sugars” sign. The factory processed some 6.5 million pounds of raw cane sugar on a daily basis.

The Domino Sugar factory in Baltimore caught fire on Tuesday, just after the iconic manufacturing facility celebrated its 120th anniversary. The blaze caused the roof of the storage area to collapse in on itself, according to multiple videos posted in Twitter.

According to NBC4 Washington, among causes of the incident could be a burning substance on a conveyor belt that ferried materials from a silo to other parts of the refinery. The exact cause of the fire is yet to be determined, according to American Sugar Refining, Inc., the owner of the Baltimore facility.

All factory employees were evacuated, and no injuries or deaths among fire services has been reported.

Better video of the fire that broke out Domino Sugar Factory in Baltimore. Flames appear to be under control now. We’ll have more details tonight on @wjz… pic.twitter.com/fIQO6wXTPa

Hats off to @lightforall for this photo of the massive Domino Sugar raw sugar storage shed up in flames. The Baltimore refinery processes 6.5 million pounds a day.https://t.co/c7Za1hHYJb pic.twitter.com/rlH0TouOW0

​Other videos depict a thick smoke, rising from the site, along with crew teams working on putting out the fire with trucks and firefighting boats, deployed in Baltimore’s Inner Harbor.

US Diplomats Were Ignored After Warning of ‘Risky Experiments’ on COVID in Wuhan Lab, Report Claims

Trump Not Considering Becoming Next House Speaker in 2022