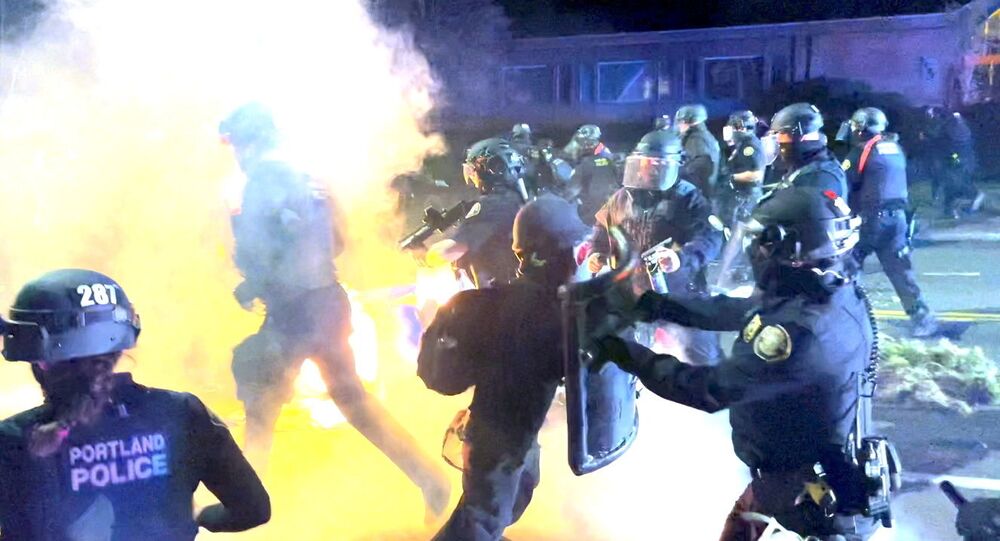 After a certain pause in mass protests since last summer, when demonstrations against police brutality and racism swept the city, sometimes violently, in response to the death of Black man George Floyd in police custody, violence has resumed, largely because of recent officer-involved shootings.

A group of 80 to 100 people gathered in the downtown area of Portland, police said on Saturday, but dispersed peacefully without police involvement. Later, a separate group of “several hundred people” marched through the neighborhood, “vandalizing and looting” businesses.

On late Friday, Portland Police declared a riot over “the widespread criminal activity” after protesters set a fire outside a local Apple store and vandalized other businesses as part of an anti-racism rally in the city.

Additional photos of fire damage in downtown Portland from arson fires set during a riot. pic.twitter.com/P5VJ7cQtbV

​”Damage to businesses hurts our City. Our community has made it clear that it will not tolerate wanton violence and destruction,” acting Portland Police Chief Chris Davis is quoted in the press release. “No one is entitled to break windows, set fires, or attack police officers. If you choose to participate in this kind of criminal activity, you can expect to be arrested and prosecuted.”

Garbage and a forklift truck parked next to it were set on fire near the Apple store in the city center. Soon the fire spread to the store itself, but the police and firefighters who arrived were able to put it out quite soon, according to the videos shared online.

A building attached to the Apple Store in Pioneer Place is lit on fire as Security guards the Apple building. #Portland #Protest #riot pic.twitter.com/m8Iio5J2ul

The Apple store is now on fire pic.twitter.com/yWvHbRNSiX

Portland Police and fire arrive and put out the fire. pic.twitter.com/6ycVLRj0HA

“None of this destruction tonight has anything to do with the important work of racial justice and reconciliation our community and our nation need at this critical time in our history,” the police chief added.

There was a separate protest group in Portland’s downtown tonight. They broke windows at stores like Nike & banks like First Republic. They set dumpster fires and this particular fire—which started with construction equipment by the Apple Store—spread aggressively. pic.twitter.com/1oN2VTeyIM

In a tweet published during the events, police urged the protesters not to interfere with the officers as they take “lawful action” while arresting individuals and dispersing the crowd.

​In total, four people were arrested in Friday’s incident, which was the third time in five days that Portland police had declared a riot, according to the statement.

Police are pushing remaining protestors out to the area pic.twitter.com/9t72saYOOj

PPB has made a sneak arrestpic.twitter.com/C0igIMkUd0

​According to the eyewitnesses’ accounts, multiple gunshots were heard in the city’s downtown following the start of detentions. The police admitted using pepper spray during the crowd dispersal.

Since the police killing of George Floyd in Minneapolis in May of last year, Portland has been the scene of frequent mass demonstrations, some of which have resulted in violent clashes between officers and demonstrators. The violent disturbances have involved arson, vandalism, and damage to local businesses, government offices, and historically significant monuments that are considered to be controversial.

‘Now is Not the Time’, Biden Team Reportedly Says as Migrant Caravan From Honduras Headed to the US