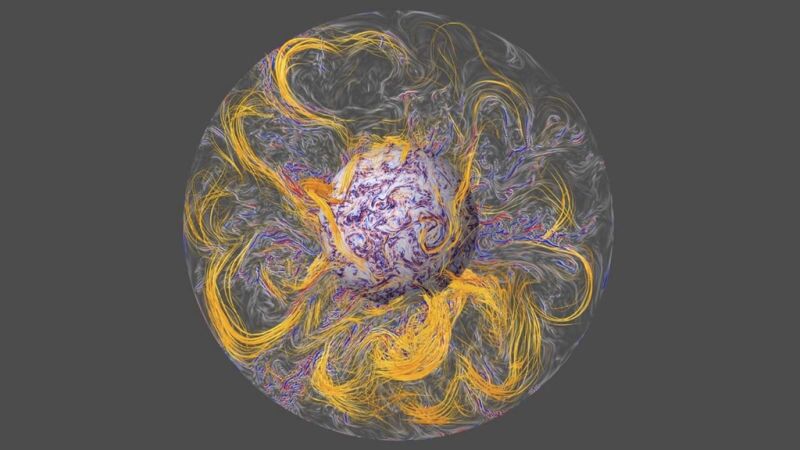 The gigantic masses that may or may not be related to a chink in Earth’s magnetic armour are suspected to be what’s left of a Mars-sized planet that collided with our world several billion years ago.

A potential culprit behind the sizeable dent in our planet’s magnetic field, located above the southern Atlantic Ocean and which has apparently been growing over the last two centuries, has been identified, Business Insider reports.

According to the media outlet, Julien Aubert, a geomagnetism expert from the Paris Institute of Earth Physics, suggested that this so-called South Atlantic Anomaly may be related to two gigantic masses located deep below ground.

Earlier, Qian Yuan, a PhD candidate studying mantle dynamics at Arizona State University, postulated that the masses in question, known as the large low-shear-velocity provinces (LLSVPs), may be the remains of a Mars-sized planet called Theia, which collided with Earth about 4.5 billion years ago.

Yuan also reportedly suggested that these masses are slightly denser (between 1.5 and 3.5 percent) and hotter than Earth’s mantle; the LLSVPs may therefore potentially interfere with the direction in which iron in the core beneath southern Africa (roughly in the vicinity of one of the LLVPs) swirls, weakening the overall integrity of our planet’s magnetic field, the media outlet notes.

This hypothesis, however, is by no means watertight because there doesn’t appear to be seems to be a magnetic field weakness over the Pacific where the second LLVP resides.

“Why doesn’t the same weakness occur in the magnetic field above the Pacific, where the other province is?” inquired Christopher Finlay, a geophysicist at the Technical University of Denmark.

While the South Atlantic Anomaly apparently doesn’t present any cause for concern at surface level, it is believed to affect satellites and spacecraft passing through the area.

New App Would Be Able to Detect Anemia at Different Stages With Smartphone Camera, Study Says

Asteroid Over 70 Feet in Diameter to Fly By Earth on Tuesday, NASA Says