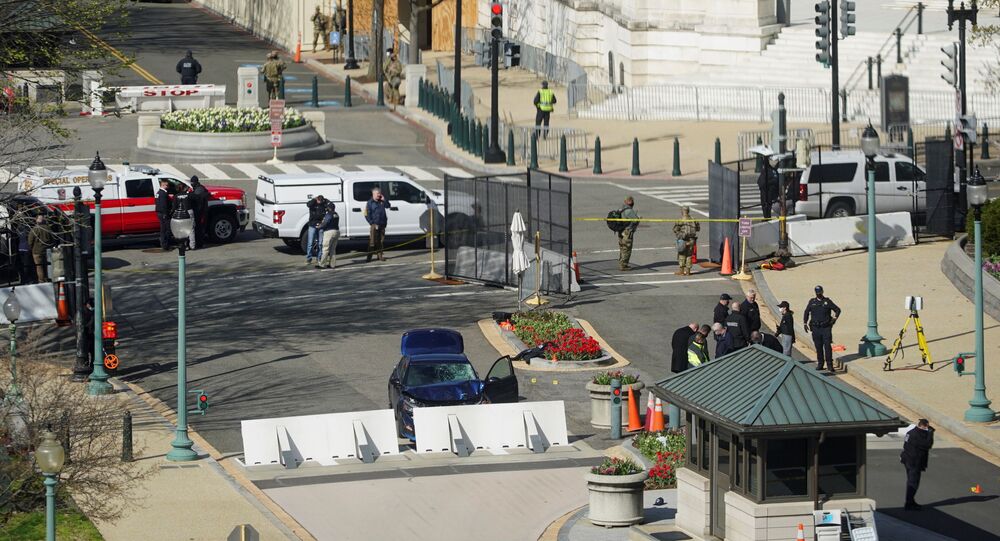 In the second attack on the US Capitol this year after the 6 January riot, when Congress’ building was stormed, a driver identified as 25-year-old black Indiana resident Noah Green allegedly rammed his vehicle into two police officers at an access point near the building, killing one and seriously wounding the other.

Rank-and-file members of the Capitol Police are reportedly feeling increasingly vulnerable and concerned for their own safety following last week’s car-ramming attack which resulted in the death of officer William Evans, an 18-year-veteran of the force and a member of the Capitol Division’s First Responder’s Unit, writes TMZ.

There has allegedly been little to no communication from authorities regarding measures to ward off a similar attack in the future, claim sources cited by the outlet.

Ostensibly, there has not been any type of formal gathering to address what sources claim was a ‘tactical breakdown’ that cost Officer William Evans his life.

​The positioning of officers on the fateful day of the attack has been called into question by lower-ranking members of the department, claims the outlet.

The officers had been stationed outside the delta barrier, as opposed to the much more strategic and safer inside barrier, reveal sources.

Since the events of Good Friday, officers assigned to stand guard have reportedly been positioned inside the barrier, yet lack of a ‘hands-on’ approach to the issue, and detailed clarifications of measures being taken by upper management are fueling a growing sense of unease among the police officers, writes TMZ.

At a roll call meeting on Saturday a deputy chief allegedly voiced a generally-worded apology for the tragedy, warning officers to “keep an eye out” in the future.

The Capitol Police officer was killed and another injured after a man drove a car into a security barricade at the Capitol complex on 2 April, with the suspect shot dead after jumping out of the car brandishing a knife and “lunging” at the officers, according to acting Chief of the United States Capitol Police Yogananda Pittman.

Source familiar with the investigation says this is the suspect in the ramming attack at the Capitol today. pic.twitter.com/AhEMRL7L16

The suspect was identified as a 25-year-old black man from Indiana, Noah Green.

Washington Metropolitan Police Chief Robert Contee said during a press conference that the attack did not appear to be terrorism-related. The motives of the man remain unknown.

JUST IN: US Capitol Police Officer William “Billy” Evans, killed in vehicle ramming attack at the Capitol on Friday, will lie in honor in the US Capitol Rotunda on April 13, Speaker Pelosi and Senate Majority Leader Schumer announce. pic.twitter.com/IJWHGKXgmB

In since-deleted social media posts by Greene, detailed that he experienced a number of issues in recent years, including the loss of his job “due to afflictions”.

“I just ask that the public continue to keep US Capitol Police and their families in your prayers,” said Yogananda Pittman, adding the department had been having an “extremely difficult” time since the Capitol Hill riot on 6 January.