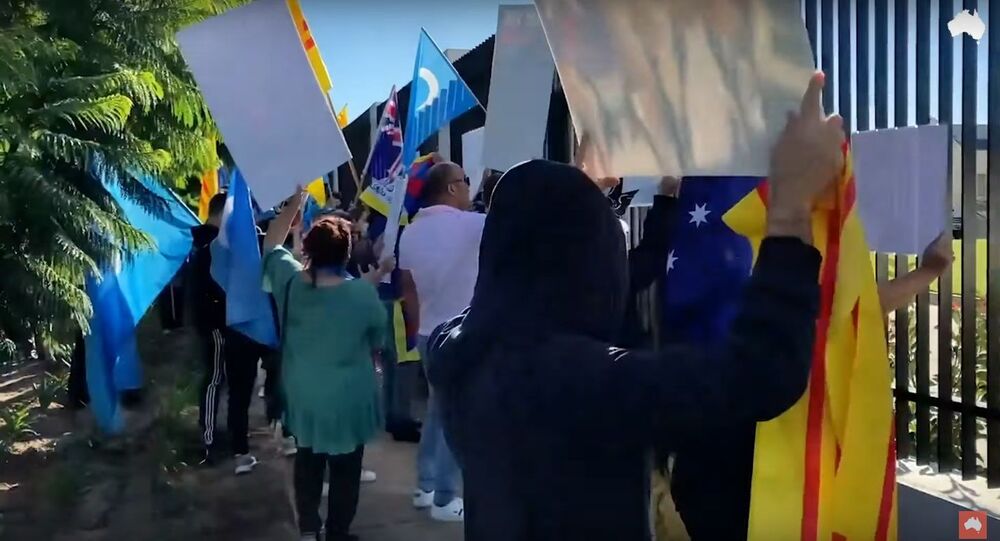 Relations between Canberra and Beijing have frayed, spilling over into an economic dimension, as China hit Australia with a slew of restrictions and tariffs targeting exports of barley, coal, cotton, lobster, meat, timber, and wine, and with Canberra reciprocating by imposing tariffs on Chinese aluminium, paper, and steel.

The official unveiling of a new Chinese consulate in a quiet suburb of Adelaide, Australia, turned into furious protest rally as hundreds of people converged around the massive 5,600 square metre compound.

​As police were summoned to the scene, two protesters were arrested for assault and public order offences.

Present in the crowd were members of South Australia’s Uyghur community, along with Taiwanese, Tibetan, Nepalese and Vietnamese nationals.

Senator Rex Patrick addressed the protesters to echo their view that the consulate didn’t “belong in Joslin”.

“It’s inconsistent with our national security needs and it’s, of course, a strong contrast to the leafy suburb that is Joslin. It simply doesn’t belong here. We have a situation where the Chinese government has been engaging in a whole range of activities that are inconsistent with our values,” said Patrick, as quoted by The Advertiser.

#China’s new fortified consulate in Adelaide was opened this morning by SA Premier @marshall_steven in an ill-considered gesture of appeasement. What Australia should be doing is imposing a real diplomatic price on China’s ongoing #cyberattacks. #auspol https://t.co/7t4EMpV0og

“In the case of China’s Adelaide Consulate General, a fortified compound to be opened by South Australian Premier Steven Marshall, a significant reduction of the eleven consular staff would help protect our vital naval shipbuilding projects and other defence industry facilities from Chinese espionage. Australia’s national security should always come first.”

Having arrived for the official opening, Premier Steven Marshall, who had earlier defended himself, insisting South Australia had strong ties with China, addressed the infuriated crowd from inside the consulate.

Built in Joslin, just minutes away from the city’s “square mile”, bordered by North, East, South and West Terraces, which is also referred to as the CBD, many have compared the three-metre high walls and CCTV cameras installed around the perimeter with a ‘fortress’.

​The protesting crowd included representatives of the close to 1,000 members of Adelaide’s Uyghur community – the largest in Australia, with the President of the East Turkistan Australian Association, Nurmuhammad Majid, condemning the consulate’s construction.

Millions being spent expanding the Chinese Consulate in Adelaide. Massive fortifications for a consulate in a quiet suburb of Australia’s 5th largest city. Adelaide coincidentally happens to host a large Uyghur population and defense industry! Why is the government allowing this? pic.twitter.com/a8qRfxNfZJ

​Last week, the US, UK, Canada and the EU imposed sanctions on Chinese officials over alleged human rights abuses against Uyghur Muslims in Xinjiang, prompting Beijing, which vehemently rejected the accusations, to retaliate in kind.

“We love this country, it has given us freedom from tyranny, so why do we let the country that has tortured us set up a home in the middle of Australia’s defence capital?” Majid was quoted as saying by The Australian.

The Chinese ministry of commerce said its investigation, first announced in late August, had determined Australian wine was being dumped in China, causing “substantial damage” to the domestic industry.

Beijing’s move followed tariffs on barley announced in May 2020 and a long-running standoff that led to commodities restricted or delayed at Chinese ports. In kind, Canberra also imposed tariffs on Chinese aluminium, paper, and steel.

As for the local residents, many took a dim view of the ‘divisive’ new addition to the neighbourhood.

“Just look at the damned thing — it’s a fortress. We have sold our soul as a nation to a communist regime that is trying to destroy South Aussie businesses and has no regard for human rights,” former resident Heather Adams was quoted by the outlet as saying.

There has not yet been any official comment from Chinese Consulate in Joslin.

Anti-Coup Protesters Take to the Streets of Yangon in Myanmar

Taliban Welcome US Forces’ Withdrawal From Bagram Air Base