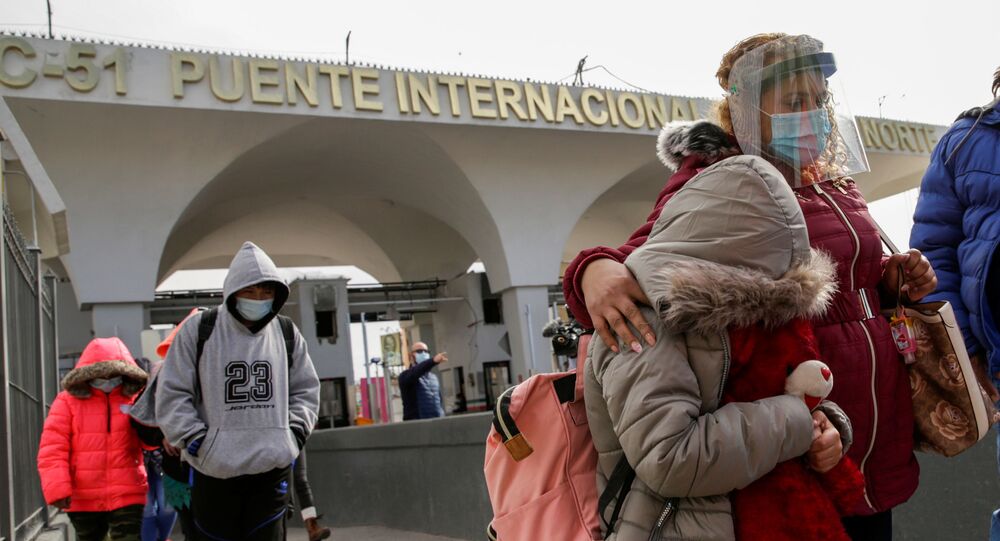 Amid the tremendous surge in unaccompanied migrant children seeking asylum at the US-Mexico border, where thousands of children are being held in overcrowded government facilities, Democrats and Republicans on Capitol Hill have slammed the administration of President Joe Biden for its handling of what some call a “crisis” at the border.

An official from President Joe Biden’s administration had requested that some photos taken by Republican senators during a visit to a US border facility overwhelmed by migrant children on Friday be deleted, reported Fox News, citing Sen. Mike Braun, R-Ind.

In remarks originally cited by the Washington Examiner, the senator had said:

“There was one of Biden’s representatives. I felt sorry for the lady because she actually talked to me about deleting a picture, but by the time she got to me, all those other pictures were taken, and that shows you the hypocrisy.”

Braun had been describing a visit to a migrant processing and holding centre in Donna, Texas – one of those that have been struggling with a recent surge in arrivals on the US-Mexico border.

​Adding that Border Patrol had similarly requested that no photos be taken because “they had to” say this, Braun insisted:

“None of us would have gone down there if we were going to be muzzled.”

Braun and 18 other Republicans, including Sen. Ted Cruz, R-Texas, had travelled to the Donna, Texas, holding centre which is at 700 percent capacity amid a surge in migrants.

The disturbing images showed children sleeping on the ground in an enclosed area.

Footage of the Biden Cages inside the Donna, Texas DHS facility where kids are packed inside.

What the Biden administration is doing is inhumane and unconscionable. But worst of all, it was preventable. pic.twitter.com/Z1vf3hLyTR

​Braun also described the jeers he witnessed border officials subjected to by smugglers known as ‘coyotes’ at the edge of the Rio Grande Valley – the busiest migrant gateway – where illegal crossing attempts are often made.

“All of a sudden to hear from the other side of the river taunting from the smugglers and coyotes, most of it in Spanish, telling the border guards that whatever you do, we’re coming… That kind of hit home in such an anecdotal way because it is one story that kind of is a metaphor for what’s happening all up and down the border,” the Indiana Republican was quoted as saying.

“I know why President Biden doesn’t want the media to be here – because we do have an open border,” Sen. James Lankford, R-Oklahoma was cited as saying after visiting the facility.

The CBP facility in Donna, Texas is a tragic superspreader event caused by the Biden admin.

Per CBP, the Donna facility has a 10% positivity rate. Roughly 4000 aliens are cramped together into cages.

Pictured (identities obscured) are kids who tested + for COVID…today. pic.twitter.com/D5JTYWV2Pl

“If you were an unaccompanied minor, you were sent over to the Donna facility, which we went over and visited. That facility is designed for 80 people in a pod, and they had 709 people… literally wall to wall in every one of the little plexiglass cells that they have, and people flooding out into the hallway,” Lankford said.

After his visit to the southern border, Sen. Mike Braun penned a letter to President Biden on Saturday to urge him to observe the “inhumane” and “dangerous” migrant crisis for what it is, and travel to the border to obtain firsthand information.

The letter, obtained first by Fox News, reportedly included pictures Braun had taken on Friday during his visit to the US Customs and Border Protection facility in Texas.

‘Not Top of Their To-Do List’: Biden Speech Viewer Rating Less Than Half of Trump’s 2017 TV Audience