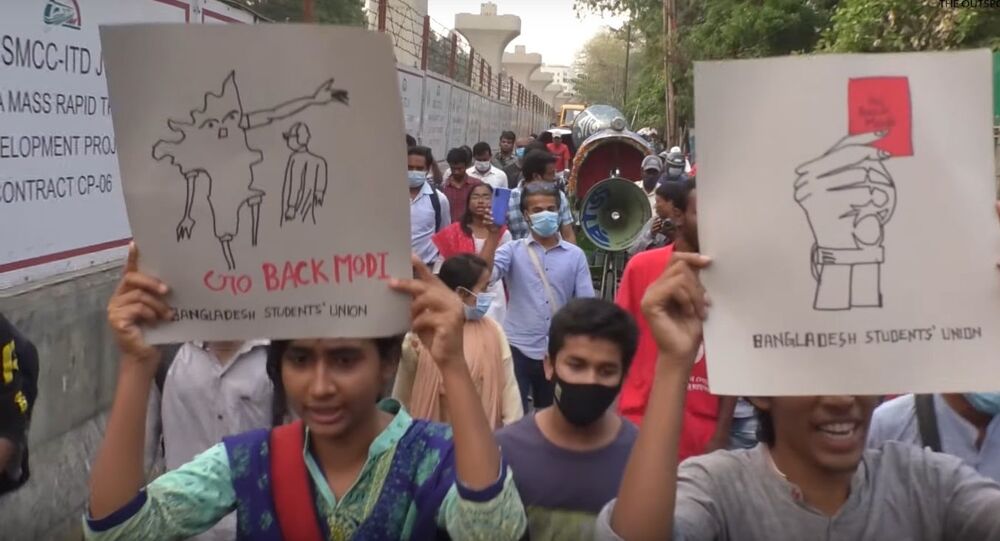 Indian Prime Minister Modi’s forthcoming visit to Bangladesh has triggered protests by students and Islamists, who have taken to the streets of Dhaka in the past few days to highlight growing instances of crimes against Muslims under the BJP government. But Dhaka says the protesters don’t represent the opinion of most Bangladeshis.

The day before Indian Prime Minister Narendra Modi’s visit to Bangladesh, a fresh round of clashes between students from Dhaka University and police took place in the Bangladeshi capital city on Thursday.

A section of student unions are protesting against the two-day visit of Prime Minister Modi.

​According to reports in Bangladesh’s local media, activists from Bangladesh Students’ Rights Council were interrupted by police while they were taking out a protest march against the Indian leader’s visit.

Dhaka Tribune has reported that several student activists suffered injuries during the clashes.

Different student groups in Bangladesh have been protesting for days against the Indian leader because of what they perceive as crimes against Muslims at some places under Prime Minister Modi’s Bharatiya Janata Party (BJP)-led government as well as incendiary rhetoric against “Bangladeshi infiltrators” by members of the ruling party, among other things.

Some of the protest groups have also voiced their opposition to India’s Citizenship Amendment Act (CAA) and its implementation in West Bengal and Assam states where elections are about to take place.

As part of the election campaign of the BJP, India’s ruling party leaders have threatened to chuck out “illegal” Bangladeshi migrants from these states if the party is voted to power.

In a similar protest by left-leaning student outfits on 23 March, activists from Samajtantrik Chhatra Front, one of the protesting groups, complained that India was getting its way with Bangladesh by “arm-twisting” the government of Sheikh Hasina.

The left-wing students alleged that they were even attacked during the protest by activists from the Chhatra League, the youth outfit of Bangladesh’s ruling Awami League outfit. The Chhatra League has denied the allegations of committing violence against the protesters.

Meanwhile, separate protests by Islamists have also been taking place in Bangladesh, with a perceived rise of Islamophobia under the current Indian government being one of their objections.

Local media reports – as well as social media posts – indicate that Islamists have adopted different expressions of protests in the run-up to Modi’s visit. Their threats include blocking the route the Indian leader’s convoy is scheduled to take, and slaughtering cows, which are held to be sacred in Modi’s religion, Hinduism.

From #COVIDvaccine to #ITindustry, bashing #India in every aspect is a useless pastime of #BNP and Pakistan-backed activists in #Bangladesh: writes @DeadTonmoy

​In the face of ongoing protests against Modi’s visit, Bangladesh’s Foreign Minister Dr Abdul Momin said on Thursday that most of the Bangladeshis were “happy” with the Indian leader’s trip, the first outside India since the onset of the COVID pandemic last year.

“The common people of the country are very happy and most of them welcome his visit (March 26-27)”, Dr Momin said.

Formerly a part of Pakistan, Bangladesh attained its independence from that country after Indian military’s backing, a military success celebrated in both New Delhi and Dhaka.

Google To Pick Up 7.7% Stake In Reliance’s Jio Platforms for $4.5 Billion – Mukesh Ambani