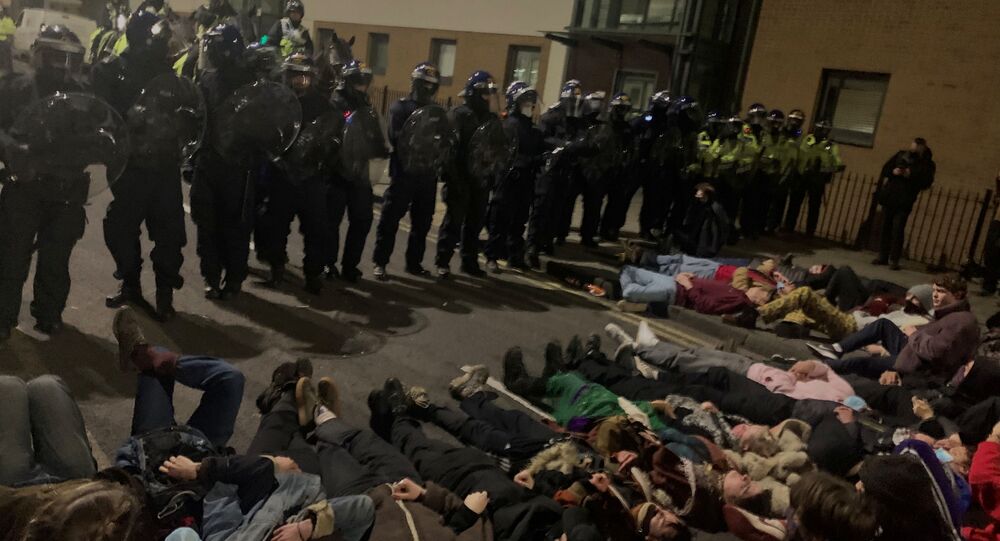 On Sunday, hundreds of demonstrators took to the streets of Bristol to oppose a new bill that would increase British law enforcement’s powers to combat protests.

“Kill the Bill” protesters have again clashed with riot police in Bristol as demonstrators refused to leave the city’s streets two days after violent riots broke out in the area.

The Police, Crime, Sentencing, and Courts Bill passed its second reading in the British parliament last week and if adopted, it would increase police powers, including putting time limits on protests. The bill was slammed by human rights groups, the UK arm of Amnesty International, and the​ campaign group Rights of Women.

Tuesday saw riot police officers, some of them on horseback and with dogs, trying to disperse 150 demonstrators who erected tents in the centre of Bristol in a show of protest against the bill.

The Daily Mail cited an unnamed police source at the scene as saying that “there was a gathering on the [College] Green that was in contravention of COVID laws so it was the police’s intention to clear the area as quickly and as safely as possible”.

The source added that “due to the ferocity of the violence on Sunday, officers needed to be in riot gear and needed to take robust action”.

Stand off between protestors and police carries on into the night at Bristol Protest #CollegeGreen pic.twitter.com/qyF2Sqwpp8

Two female protesters were quoted by the Daily Mail as claiming that police used force in order to disperse the crowd.

“They just came at us and gave us no warning whatsoever. I shouted to one ‘what are you doing’ and he hit me in the face. He hit my friend too and made her nose bleed. Nasty, nasty people”, one of the protesters asserted.

The remarks followed at least 20 police officers being injured in Sunday’s clashes in Bristol, during which police vehicles were set on fire and “criminal damage was caused to the police station exterior”, according to a spokesman for Avon and Somerset Police.

He argued the “disorder” came after protests by about 3,000 people kicked off in central Bristol.