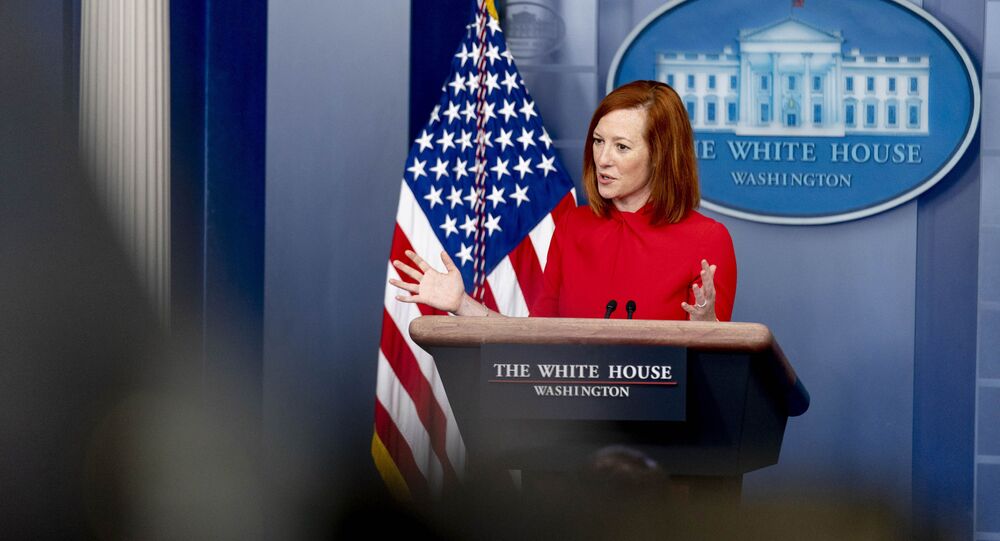 The US House of Representatives passed two bills on 11 March to require background checks on all firearms sales and transfers and to allow an expanded 10-day review for gun purchases, after Democratic President Joe Biden had campaigned on a sweeping gun-control agenda.

The Democrats’ currently-invigorated push for gun control laws in the US House and Senate has led the National Rifle Association, a powerful US gun lobby group, to lash out at Jen Psaki – now the White House press secretary for President Joe Biden’s administration.

On 4 February 2021, Psaki said Biden “would love to see action” on gun control, and on 16 February, Fox News quoted her as saying gun control “is a priority to [Biden] on a personal level”.

The press secretary added that the President was seeking to remove “liability shields” from gun manufacturers – something Biden campaigned on – by repealing the Protection of Lawful Commerce in Arms Act (PLCAA), designed to protect gun manufacturers from lawsuits.

Psaki has been reminded that she asserted in 2020 in a tweet that gun registration is a way to get “mothers out to the polls”.

An irate NRA went on Twitter to offer Jen Psaki a ‘lesson on the Second Amendment’ and vowing that Americans would never ‘give up their guns’.

​In response, Psaki tweeted that the NRA was ‘attacking her’ over a throwback tweet.

Badge of honor that the @NRA is randomly attacking me about a tweet from more than a year ago https://t.co/ExHFecjzHp

​Netizens weighed in on the spat, with some conceding that they would be ‘happy to register guns’ arguing that ‘accountability & responsibility’ were required today.

I own guns. My state doesn’t require registering them. I’d be happy to. Nobody’ll ever take them away, unless I do something that would merit them being taken away.

‘The right of the people to keep and bear arms, shall not be infringed’

I can’t understand why more people aren’t screaming about the fact that they want no restrictions whatsoever on gun ownership, but they want to make it harder to vote. These are some pretty fucked up priorities.

That’s because their talking point was decimated again. 8 people are dead today here in Georgia that should not be. Something that a mental health check would prevented. The “ law abiding gun owner” was law abiding right until he murdered 8 people….

Gun registration does NOT lead “always” to gun confiscation.

Registration like background checks DO pick up people (criminals) prohibited from having guns which protects law abiding gun owners as well as non-gun owners.

​Others on social media called into question the NRA’s warning regarding the ostensible blowback from registering guns.

Registration always leads to confiscation. What an absurd statement. I register my car, I don’t believe the government has tried to confiscate my car yet. This is a fear issue the GOP likes to push but the bottom line is, no one is coming to take away your guns.

Prepare your next presser to explain the idiocy of their registration = confiscation BS narrative and educate Americans about how BASIC an ask this is. Please.

Millions now have licenses to carry guns and NONE have been confiscated. Just the way the bankrupt NRA is trying to raise money. And it’s bankrupt because its leadership used membership money for personal use.

1. Absolutely a badge of honour ❤️💪

2. I’ve never known anyone have their registered car confiscated by the US government. pic.twitter.com/dVhpT8J1mX

​Twitter users also gave the NRA credit for referring to the WH press secretary as ‘circle back Psaki’.

Ok but “Circle Back Psaki” is kinda funny

​Some applauded Jen Psaki, urging her to disregard the sarcasm being levelled at her.

Why do they call you “Circle Back Psaki” as if it is an insult??

I rather you “circle back” than lie to me like Kayleigh.

Seems like it’s also a badge of honor to be nicknamed “Circle Back Psaki.” They apparently think they’re owning you by pointing out you’ll look for answers instead of making stuff up on the spot? pic.twitter.com/CTl1uQaUuF

​Acting on their current majorities in the House and Senate, Democrats have made a push to enact the first of mulled new gun control laws, starting with stricter background checks.

The House passed two gun control bills on 11 March, with the first one expanding background checks on all firearms sales and transfers. The second bill would give authorities a 10-day review for federal background checks before a gun sale can be licensed, instead of the current three days.

The bills face an uphill battle in the Senate, however, as they would require bipartisan support to pass.

President Joe Biden campaigned on an ambitious gun reform agenda that included a wholesale ban on the manufacture and sale of ‘assault weapons’ as well as closing various gun ownership loopholes and banning the sale of guns and ammunition online.

As Joe Biden met with leaders of Atlanta’s Asian American community to discuss the massacre on Tuesday that killed 8 people, which he said was another example of a “public health crisis of gun violence”.

Earlier, speaking on the third anniversary of the massacre at Marjory Stoneman Douglas High School in Parkland, Florida, America’s deadliest school shooting, Joe Biden laid out his intentions for new gun control laws, underscoring there was no time to waste.

The NRA responded to Joe Biden’s statemen, tweeting that the organization would not stop “fighting for the 2nd Amendment”.

NRA will NEVER stop fighting for the 2nd Amendment!

​The issue has been a divisive one, with many Democrats hoping to push through still tougher legislation, while Republicans who oppose the laws argue that they would infringe upon the right to bear arms guaranteed under the US Constitution’s Second Amendment.

The developments come as the National Rifle Association itself, the influential gun lobby, has been in turmoil after announcing in January that it had filed for bankruptcy.

The foremost gun lobby group revealed it intended to leave New York State, where it was founded in 1871, and seek to reinvent itself as a non-profit in Texas instead, in a move it is calling “Project Freedom,” according to a statement published 15 January.